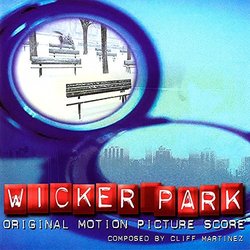 Cliff Martinez, a common collaborator with Steven Soderbergh in such projects as Traffic and Solaris, often has his scores overlooked because of the subtlety to them. Atmospheric and ambient, his work on the above-mentioned projects and others, such as Narc, support the films well, but rarely provide any exceptional amount of interesting melodies for the casual listener on album. Martinez' score for Wicker Park, starring Josh Hartnett, is no different.

The foundation of the score is a tremoring, ambient electronic sound, similar to some of Harry Gregson-Williams' scores, such as Phone Booth. About half of the 28 minute score is primarily this effect. The remaining cues consist of light percussion overlaid with strings and woodwinds. Two tracks ("Following Daniel" and "Finally, You Two Meet") contain the theme of the score, which is a simple melody on the piano that segues into a moving woodwind and string cue. The final track, "Have A Good Trip" reprises this theme. Martinez utilizes synthesized percussion well in some cues to give the often monotone score some movement, namely in the chimes in "What Shoe Size" and "My Dad's Famous Potatoes" and the more percussive drums in "Following Daniel". The latter opens the album and stands as the best cue on the album, as it both contains the main theme and sets the mysterious mood for the film in the almost jazzy piano and moving, yet ambient electronics and percussion.

Wicker Park is a decent score for the thriller genre, but Martinez does nothing new with it. The music provides a gloomy and mysterious soundscape for the film, but aside from a few key tracks, the short album is little more than background music. However, for fans of Martinez' other scores, this album, while short, does have some interesting moments.