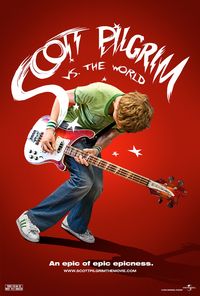 Scott Pilgrim vs. the World

"This is happening, right?"

That's the phrase that kept running through my head as I watched Scott Pilgrim vs. the World, the latest film from Shaun of the Dead and Hot Fuzz director Edgar Wright.  Fortunately, the title character himself (played by Michael Cera) says those very words about 2/3 through the film, solidifying the fact that, yes, this was indeed happening.  Based on the popular graphic novel by Bryan Lee O'Malley, the film starts out simply enough: 22-year old Scott Pilgrim (Cera) is the bass player in Sex Bob-omb, an indie rock band. He's dating a 17-year old Asian high schooler, Knives Chau (Ellen Wong), mainly to get over a failed relationship with Envy Adams (Brie Larson), who has become a successful rock star.  While at a party, Scott sees Ramona Flowers (Mary Elizabeth Winstead), and is instantly smitten with her.  He starts to woo her behind Knives' back, but soon things take a turn for the unexpected when, during a concert, Ramona's first ex-boyfriend shows up demanding a duel.  Let me correct that - her first evil ex-boyfriend.  The film take a major left-turn into surrealism, and now Scott must successfully defeat all seven members of "The League of Evil Exes".

To say that Scott Pilgrim vs. the World takes a lot of inspiration from videogames is an understatement.  From the opening 8-bit version of the Universal Studios - replete with 8-bit rendition of Jerry Goldsmith's fanfare - it's safe to say that the audience is going to be in for a very unique experience. Once the battles begin, it's even more apparent that this is a live-action videogame, with hyper-fast camera cutting, wild visuals, and plenty of adherences to videogame principles. When an ex is defeated, they explode into a shower of coins, and Scott "level-ups". The different exes all have different fighting styles, allowing Wright to film a rather versatile number of sequences.  It borders on too-much at times, and this film definitely requires multiple viewings to take it all in.

Scott Pilgrim vs. the World is not like anything you've ever seen.  People might shy away from it based on the trailer (and honestly, overexposure of Michael Cera), but the supporting cast - from Scott's gay roommate Wallace (Kieran Culkin), his sister Stacey (Anna Kendrick), to the various "League" members, including Chris Evans, Brandon Routh and Jason Schwartzman - keep things fresh and engaging. The score, by Radiohead producer Nigel Godrich, references video game scores, and keeps things decidedly indie and fun. Additionally, the songs in the film (that the various bands, including Sex Bob-omb, play) were written by such artists as beck, Metric, Broken Social Scene, and others.

Scott Pilgrim vs. the World is a surface-deep film that doesn't take itself too seriously, but there's nothing wrong with that.  It's silly fun, and with no expectations, it was one of those truly amazing viewing experiences.  Fortunately, with the new Blu-ray release, there are enough extras that you'll definitely be going back and watching it multiple times (more on that later).  The look of the film, as presented in HD for the home, is solid.  The film has a very processed look to it at times, given the graphic novel and video game nature of the story, but contrast is solid, with deep blacks, and color is slightly desaturated at times, and overblown at others. A light veneer of grain keeps things very film-like, and there was no compression artifacting at all to speak of. All in all, this is an excellent transfer.

Audio is presented in a DTS-HD Master Audio 5.1 English track, and oh boy does it rock the house.  There is so much happening in this track that it's difficult to know where to keep your ears.  The "bass battle" between Scott and Todd (Routh's character) will have your subwoofer working on overtime.  The music takes center stage, sounding excellent, and even during some of the more frenetic sequences, dialogue is clearly audible.  This is a demo-worthy track.  Additional audio options include Spanish and French DTS 5.1 tracks, and a Descriptive Video Service track, for the hard of seeing.

The amazingly extensive supplement package for Scott Pilgrim vs. the World starts out with four (yes, four!) commentary tracks. A feature commentary with Director/Co-Writer Edgar Wright & Co-Writer Michael Bacall and Author Bryan Lee O'Malley is the best one. Fast paced, fun and engaging, there's a lot of information disseminated here.  We then get a Technical Commentary with Wright and Director of Photography Bill Pope, focused on the shooting of the film, the look of it, the locations, and more.  Pope is a great talent, and it's always good to hear his reasoning on things, though Wright clearly was in control. A Cast Commentary with Michael Cera, Jason Schwartzman, Mary Elizabeth Winstead, Ellen Wong and Brandon Routh is a decent but not necessary track; Cera dominates it, and there are a few dead spots where they all seem to be watching the film.  This track should have been combined with the final commentary track, which is another Cast Commentary, with Anna Kendrick, Aubrey Plaza, Kieran Culkin and Mark Webber.  This final track is the weakest of the lot, and feels unnecessary given the amount of extras that we still have yet to dive into.

The disc then presents a large selection of "Deleted Scenes" (HD, 27-minutes), which is a whole slew of unused, alternate or extended scenes (not just deleted ones), provided with optional commentary by Edgar Wright.  A "Blooper Reel" (SD, 9.5-minutes) showcases some amusing flubs, and "Alternate Footage" section contains "Alternate Edits" (SD, 12.5-minutes) which gives us different scene edits, and "Bits and Pieces" (SD, 7-minutes) which contains a bunch of different takes for some of the funnier lines in the film.

One might initially think that the heart of the supplements is the "Documentary" section, with three documentaries.  Starting with a two-part documentary, "Making of Scott Pilgrim vs. the World" (HD, 49.5-minutes), this is a rather in-depth and fast paced look at the evolution of the film, from the graphic novel to film development, stunt choreography, camaraderie between the actors, and much more. "Music Featurette" (SD, 16.5-minutes) talks about the importance of music in the film, showcasing the fictional bands in the film, the hit artists who provided songs for the bands, and the actors who play them rehearsing and learning how to actually play the musical numbers.  "You Too Can Be Sex Bob-omb" (SD, 2.5-minutes) is a quickie featurette that teaches the viewer how to play one of the film's songs on guitar.

But we're not done yet.  Next up are four "Music Videos" (SD, 10-minutes), and seven "Audio Visual Remixes by OSYMYSO" (SD, 9.5-minutes), a really entertaining and clever mashup of some of the best dialogue bits from the film, remixed! Very catchy.  From there we head over to post-production, with the "Visual Effects" section.  "VFX Before & After" (SD, 14.5-minutes) looks at a few of the film's more effects-heavy sequences.  "Roxy Fight / Ribbon Version" (SD, 1-minute) is the in-camera shot version of the Roxy fight scene (pre-VFX), and "Phantom Montage: Hi Speed Footage" (SD, 4-minutes) is a surreal collection of various super slow motion shots against blue screens.

"Soundworks Collection: Sound for Film Profile" (SD, 5.5-minutes) is a short but really interesting look at the film's sound effects.  For promotional stuff, three theatrical trailers (SD, 5.5-minutes), ten "TV Spots" (SD, 8.5-minutes), and four "Video Game Trailers" (SD, 5-minutes) are included, as well as "Adult Swim: Scott Pilgrim vs. the Animation" (SD, 4-minutes) is a quick animated short that aired on Cartoon Network to promote the film, and  "Scott Pilgrim vs. the Censors: TV Safe Version" (SD, 4-minutes) shows what the television version might sound like, with re-dubbed dialogue. In the "Blogs" section, we gain access to Edgar Wright's eight-part production diary (SD, 46-minutes), which provides even more behind-the-scenes material.  The "Galleries" section gives us access to production stills, artwork, publicity material, and much more, a U-Control "Storyboard" picture-in-picture track, and finally (yes, really!), there's a trivia track that provides us with a lot of info and background on everything, even what music cue is playing, as you watch the movie.

Scott Pilgrim vs. the World might not be everyone's cup of tea. It's a rather eccentric and bizarre film, but it instantly won a place in my heart. If you're not sure about it, rent it first - but definitely see the film.  If you like it, then absolutely buy it; the wealth of extras is overwhelming and substantive, and definitely worth having in your collection.