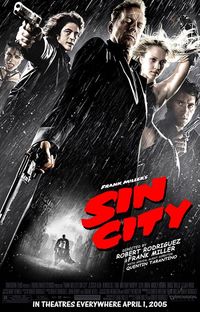 Back in 2005, Robert Rodriguez brought Frank Miller\'s stylistic neo-noir graphic novel to life with the star-packed Sin City.  Co-directing the film with Miller, Rodriguez was able to bring three different storylines to life in a visually stylistic manner that accurately re-created the high contrast black and white look of the books.  The stories are all connected in small ways, and feature majorly flawed characters as the protagonists (Mickey Rourke as a tough guy out for revenge; Bruce Willis as a detective trying to protect a girl; Clive Owen as a man caught in the middle of a war between prostitutes and the police), going up against even more disturbing and morally corrupt antagonists (Elijah Wood as a cannibalistic killer, Nick Stahl as a perverted child molester, and Benicio del Toro as a corrupt cop).  Everyone has their hands dirty in some way. And most characters have a messy end.  It is a well-crafted piece of cinema, with the storylines having common threads, and a nice balance of characters dealing with morality quandaries, and extremely violent action scenes.  Sin City is not really a gory film, but it is still hardly for the squeamish.

Released in the fall of 2005 as a theatrical cut DVD, Sin City got the vaunted Robert Rodriguez special edition treatment a few months later, with the "Recut-Extended-Unrated" release of the film.  Now the Blu-ray has finally come out, and replicates everything that had been released previously, and even brings us a few new goodies.

The film was shot digitally, and as a result, the direct-digital Blu-ray transfer has a super-clean look that accurately recreates everything that Rodriguez intended the audience to see.  With a high contrast "black crush" in the film, there is a surprising amount of detail in the grays, and the occasional use of a selective color stands out clearly.  Audio is presented in English 5.1 DTS-HD Master Audio, as well as Spanish and Portuguese 5.1 Dolby Digital.  It\'s an excellent track, perfectly presented.  Narration and dialog is front-and-center, and the sound effects and music are deep and vibrant.  The music by John Debney, Graeme Revell and Robert Rodriguez is given crisp attention and is never completely overpowered by the sound effects.

The Blu-ray release comes with two discs.  The first disc contains the theatrical cut of the film, as well as the two commentary tracks from the previous release.  The first one has director Robert Rodriguez with co-director and writer Frank Miller.  It\'s a very informative and in-depth track, with Rodriguez talking about the pros and cons of shooting a film nearly all green-screen, and Miller providing invaluable insight into the world of Sin City.  The second commentary is Rodriguez with friend and "guest director" Quentin Tarantino.  It\'s not as informative as the first track, with Tarantino yammering away most of the time, but about 3/4 of the way into the film, Bruce Willis shows up and provides some more useful information.  Finally, an "audience reaction" track is included, though aside from the occasional cheers, doesn\'t add much to the movie watching experience.  The highlight of the disc is the "Cine-Explore Mode".  This is not your ordinary picture-in-picture track; rather, the use of green-screen footage, graphic novel frames and behind the scenes footage is all seamlessly interwoven into a visual journey through the making of the film, as the Miller/Rodriguez commentary track plays.  It\'s great to see a lot of the green-screen material in true HD (the second disc contains a significantly sped-up green-screen version, in SD), and the graphic novel panels are so clear that you can read the dialog!

The second disc contains the "Recut, Extended, Unrated" version of the film, which is really four separate "stories" that stand alone.  The bookend story, featuring Josh Hartnett as an assassin, is very short and doesn\'t seem to work well as a stand-alone piece.   The rest of the stories work individually, as lengthy short films that provide a little more depth and plot to the slightly abridged versions in the theatrical cut.  It\'s all presented in full 1080p, with the same transfer and audio quality as the theatrical version.

"Kill \'Em Good: Interactive Comic Book" is a motion-comic version of "The Hard Goodbye", but with three sequences where you can use your remote control to play mini-games that will hopefully let you survive long enough to see the story through to completion.  The rest of the disc has all of the extras from the previous DVD release, in standard definition. "How It Went Down: Convincing Frank Miller to Make The Film" (SD, 5.5-minutes) features Rodriguez and Miller talking about the challenges posed with adapting the graphic novels and making them into a cinematic experience - and how Rodriguez managed to get Miller on board, with the "test" he shot.  "Special Guest Director: Quentin Tarantino" (SD, 7-minutes) is a short featurette looking at how Tarantino came down to direct one scene for the film, but had to be convinced to shoot digitally.  "A Hard Top with a Decent Engine: The Cars of Sin City" (SD, 7.5-minutes) is a pretty interesting piece about the challenges the production had in finding authentic cars that matched those that appeared in the graphic novels.  "Booze, Broads, and Guns: The Props of Sin City" (SD, 11-minutes) is another interesting bit that focuses on the props used in the film, and how they were created or found based on the designs that appeared in the graphic novels.  The various make-up effects are explored in "Making the Monsters: Special Effects Make-up" (SD, 9-minutes), and wardrobe challenges are looked at in "Trench Coats & Fishnets: The Costumes of Sin City" (SD, 7.5-minutes).

Under the section "Rodriguez Special Features", we get five more featurettes.  "15-minute Flic School" (SD, 12.5-minutes) isn\'t exactly the advertised length, but in keeping with his other "Film School" featurettes, Rodriguez walks us through a variety of all the different types of visual effects in the film, at lightning-fast speed.  The "All Green Screen Version" (SD, 12.5-minutes) is the entire film, as shot on the green-screens sans visual effects, sped up to fit in a very brisk 12-minutes, set to music from the film.  "The Long Take" (SD, 18-minutes) is a complete 14-minute take that Tarantino shot of a scene between Benicio del Toro and Clive Owen.  "Sin City Live in Concert" (SD, 9-minutes) is a performance by Bruce Willis and his rock band performing a song called "Devil Woman" from a show they threw for the cast and crew.  Completely unrelated to the movie but still pretty interesting is "10 Minute Cooking School" (SD, 6.5-minutes), where Rodriguez shows us how to make breakfast tacos. Finally, the theatrical teaser and trailer (SD, 4-minutes) are included.

Considering how the entire film was shot in HD, and much was made about the digital technology, it\'s too bad that none of the previously released extras were presented in HD.  But there is a lot packed onto these two discs, and with an awesome visual transfer, excellent audio mix and solid extras, Sin City makes the jump to Blu-ray successfully, and is well worth the upgrade from the standard definition version if you already have it.