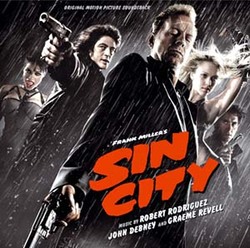 Many directors know what they want in the musical accompaniments to their films, but few are capable of actually composing it themselves; Clint Eastwood, John Carpenter and Robert Rodriguez come to mind. Beginning with Spy Kids in 2001, Rodriguez has begun to take on more and more of the musical responsibility for his films, finally writing score himself for Spy Kids 3D, Once Upon A Time In Mexico, and Kill Bill Vol. 2. For Sin City, the soundscape that this visually stunning film required was a bit too much for the director to take on with so much else on his plate, and this fact probably led to a better score. I do not say this because of anything against Rodriguez' musical ability, but because a multiple-composer approach is exactly what the film needed.

This is not the first time Rodriguez has used multiple composers; for Spy Kids, he used somewhere around a dozen composers and orchestrators. But the design for Sin City was a bit more structured than that. The film took three of Frank Miller's seven story lines and wove them into a feature-length film, that surprisingly did not feel disjointed. The advantage to bringing John Debney and Graeme Revell on board was that Rodriguez acquired the ability to create three separate sounds for his three stories and maintain a consistent palette through the use of his "Descent" theme.

The Varese Sarabande release of the score presents it chronologically, beginning with the opening sequence with Josh Hartnett and the brief Bruce Willis scene, both composed by Rodriguez. Revell's work for Marv's scenes come next. He takes an approach that is similar to some of his darker action scores, such as Assault on Precinct 13 or Daredevil, and gives it a noir spin with a low saxophone and Rodriguez' "Descent" theme performed by percussive electronic bass piano chords. The other instrumentation technique he employs is a female vocal by Rebekah Del Rio, whose eerie solos act as the musical character of Goldie calling out to Marv. "The Hard Goodbye" is the climax piece for this story line and Revell orchestrates it well with his usual harsh electronic percussion (The Chronicles of Riddick), low trombone chords, staccato brass, and short bursts by the choir. In "Cardinal Sin," he also appropriately uses the sound of an organ. His segment closes with Del Rio's vocals again in "Her Name Is Goldie."

John Debney went for a classic noir feel, with solo trumpet and saxophone, recalling Goldsmith's work for L.A. Confidential, which attempted the same sound. Unlike Revell's segment, Debney's music utilizes an orchestra to portray the more heroic character of Dwight (Clive Owen). Debney uses fast-paced light percussion in contrast to the heavier electronic beats Revell used and a pulsating string line in "Old Town." He also breaks out the brass at some key moments, at one point sounding almost like Goldenthal's noir-ish music for Batman Forever ("Deadly Little Miho"). The jazzy "Jackie Boy's Head" segues into "The Big Fat Kill", which builds to a dramatic moment of a saxophone solo underlain by a full string section.

Rodriguez' music for the Hartigan/Nancy storyline began in "One Hour to Go" and is picked up again for the last segment of the album. His orchestral approach (conducted by Debney) is straightforward noir with the harp, strings, and piano as the main sounds behind the gritty modulated sax solos. His main theme is not used as much for his music as one would expect and only comes back in full for the "End Titles", a rock-version of the main theme.

The album also includes two non-score tracks: the rock song "Absurd" by Fluke and the classical piece "Sensemaya" by Silvestre Revueltas, both of which complement the feel of Sin City nicely. The album is well packaged, and the track names are very clever, some downright hilarious (see the movie). While each composer brings a different style and feel to the film, the rough saxophone and sorrowful trumpet and vocal solos maintain a soundscape that keeps the film one entity rather than three separate stories. Behind a groundbreaking visual piece is also a unique musical journey that truly takes the listener into the world of Sin City.