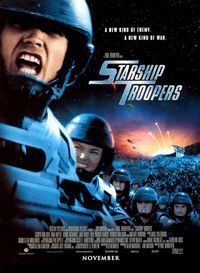 Finally, we get to the original one: Paul Verhoeven\'s Starship Troopers.  Assuming you have read these reviews in order, you\'ve suffered through the dismal Starship Troopers 3: Marauder, and the failed but noble attempt, Starship Troopers 2: Hero of the Federation.  Both of those direct-to-video sequels pale in comparison with the ingenius satirical qualities of Starship Troopers.  Loosely based on the classic sci-fi novel by Robert Heinlein, the film follows a groups of friends and their experiences during the Bug War.  Johnny Rico (Casper Van Dien) is they typical high school jock - a great athlete, but a head full of rocks.  When his sultry girlfriend Carmen (Denise Richards) decides to join the Federal Service, he blindly follows her, because he wants to be with her and to achieve citizen status.  Unfortunately, he\'s pretty dumb - so off he goes to the Mobile Infantry, while Carmen is sent off to Flight School.  Meanwhile, his best friend Carl (Neil Patrick Harris) has been sent off to Games and Theory (i.e. military intelligence), and Dizzy Flores (Dina Meyer) - who has secretly loved Johnny Rico - joins the Mobile Infantry to be with him.  As each of them work their way through military training and ultimately battle, their relationships will be tested as they fight the Bugs.

The tongue-in-cheek humor and social commentary style of filmmaking seen in RoboCop makes a return here, with Verhoeven taking Ed Neumeier\'s script to the next level - by making Starship Troopers a propaganda film.  Nods to Triumph of the Will are abundant, and with a larger discussion about the meaning of war and the value of violence over diplomacy, the film seems to relish in the presentation of violence as matter-of-fact, and with a glossy veneer over the whole film shoot, the gory aspects of the movie are effectively startling.   It\'s a movie that was completely misunderstood when it was released in theaters, and only through repeated viewings on home video has it truly found the audience - and the respect - it deserved.

Released on Blu-ray disc, the new transfer for the film is about as good as this movie is ever going to look.  Detail is great and the image is crisp and nicely lit; while there\'s a little bit of film grain, it feels very natural and lets Jost Vacano\'s cinematography shine through.  The colors especially look great, with natural skin tones and deep blues in the night scenes.  When the spaceship Roger Young gets ripped in half, you can see a great amount of detail.  There is a weird glitch where two shots are repeated a few seconds apart, and while it isn\'t noticeable unless you\'re looking for it, Sony would do well to fix this and offer a replacement program.  The audio is great - loud, punchy and immersive, this is the way Starship Troopers should be heard.  Basil Poledouris\' score sounds excellent, and dialogue is nicely balanced.

Released numerous times on DVD, the Blu-ray disc contains almost everything that had been included on the 2-disc Special Edition DVD (which is apparently now out of print).  First up is the original commentary from the 1998 home video release, featuring director Verhoeven and screenwriter Neumeier.  It\'s a solid track, focusing more on the filmmaking aspects and criticism of the film.  The next commentary features Verhoeven with cast members Casper Van Dien, Dina Meyer and Neil Patrick Harris. It\'s decent as far as cast commentaries go, but feels more like a "hey remember that?" roundtable chat than anything truly informed.

A bunch of featurettes are presented in Standard Definition. "Death from Above" is a 30-minute look at the film\'s success as a satirical work of fascist propoganda, changes from the Heinlein novel, and the critical reaction.  That\'s what I love about documentaries made after the film has been released; it allows people to take an honest look at what they\'ve done and how it was received - most commentaries/documentaries seem to be done prior to theatrical release, so everyone usually just talks about how great it was to work on the film, and how wonderful it must be.  Definitely a highlight of this disc.  For an example of the pre-release optimism, the 8-minute long "The Making of Starship Troopers" is included.  "The Spaceships of Starship Troopers" gives us a look at the design of the ships, from production art, miniatures, CGI, and animatics.  "Know Your Foe" looks at the different Bug species, and "Scene Deconstruction with Paul Verhoeven" we look at a few scenes from storyboards, to production, to visual effects, to the final shots.

For the Blu-ray release, a few extras are included.  First up is the "Blu-Wizard", a programmable menu that lets you pick and choose which of the extras you want to have automatically play.  It\'s an interesting way to watch all of the aforementioned extras without touching your remote.  The "FedNet Mode" will let you watch the movie with interviews, picture-in-picture video footage, and pop-up trivia. It\'s like the "Marauder Mode" from the third film, but all of the material presented here is new - the cast/crew interviews are all recent, and there\'s pretty much no overlap from the previous supplements.  Great stuff!

A "Recruitment Test" game is included (you can skip it), and if you have BD-Live, you can "Put Yourself in the Movie" by uploading a picture of your face to a website.  It\'s pretty hokey, but is good for a laugh.  Missing from the disc are a few things that were on the DVD: the filmographies, the theatrical trailer, storyboards and production art galleries, and most disappointedly, the isolated score with commentary by the late, great composer Basil Poledouris.

Starship Troopers is a great film that wasn\'t received well when first released.  It\'s found a following on home video, and the new Blu-ray release presents the movie with great image and sound.  The extras are extensive, and the FedNet Mode is great. It\'s tragic that Sony would omit a few key extras - so I can\'t recommend outright replacing your DVDs; instead, snag the Blu-ray for the better quality and new extras, but hold onto the (now out of print) two-disc Special Edition for the Poledouris commentary, production artwork and trailer.