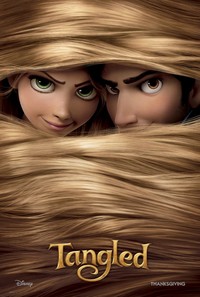 Tangled is not only Walt Disney Animation's 50th feature-length release, but it's also the most expensive animated film made (to date).  Early on in the studio's history, Walt Disney was keen on adapting classic fairy tales into new stories.  The story of Rapunzel was in development at the studio since the 1940s, but it was not until this past year that it finally made it to the big screen.  Tangled starts out with some back story.  Gothel (voiced by Donna Murphy) is an old woman who discovers an enchanted flower - when she sings to it, it has the power to make her young again.  For hundreds of years she does this - until the pregnant Queen falls ill, and the King sets everyone out to find this mystical flower with the power to heal. They find it and use it to heal the sick mother.  The resulting baby, Rapunzel, has golden hair which retained the flower's healing and rejuvenating power - but if her hair is cut, it turns brown and loses its power.  So Gothel kidnapped Rapunzel and locked her away in a tower, preventing her from cutting her hair, and using its powers to keep her young.  Each year, on Rapunzel's birthday, the King and Queen release golden lanterns into the sky in hopes that it will bring their daughter back to them.

Now eighteen, Rapunzel (voiced by Mandy Moore) asks her 'mother' Gothel if she can leave the tower to go see the lights that appear every year on her birthday; a request that Gothel flatly refuses.  But when dashing young thief Flynn Rider (voiced by Zachary Levi) discovers the tower while escaping from the castle guards (and the fellow thieves he betrayed) having stolen the missing Princess's tiara, Rapunzel knocks him out and hides the stolen loot.  But soon she sees an opportunity to see the world, and works out a deal - he takes her to see the lanterns in person, and he'll give back his stolen treasure.  As Mother Gothel searches for Rapunzel, and Flynn tries to stay one step ahead of the guards and the evil Stabbington Brothers (Ron Perlman).  Soon the relationship between Rapunzel and Flynn evolves, in true Disney fashion, from one of convenience, to a more romantic one - but will it last?

Tangled is a well done film, even if it adheres tightly to the Disney formula.  The characters are likable, Rapunzel is seeing the world for the first time, and it's fun to see it through her eyes. The overly confident Flynn provides us with some enjoyable action sequences, and serves as a suitable romantic lead as well.   While Gothel isn't really an 'evil villain', she's still fun to hate for taking advantage of the naďve Rapunzel.  But I founds the most fun to be had in the two non-verbal roles of the animals.  The chameleon Pascal is Rapunzel's little friend, and a delight to watch - but not nearly as much as Maximus, the horse of the head of the palace guard. Animated as though he were a dog, Maximus (and his rivalry with Flynn) is definitely a highlight of the film.  Also of note, aside from the impressive technological aspects (hair simulation and rendering, etc.), is Alan Menken's music.  Taking a page from the Beauty and the Beast formula, there's a lot of different musical numbers in Tangled, all of which are top notch, and incredibly catchy.  The highlight, of course, is the Oscar-nominated "I See the Light".  His musical underscore as well is solid and well-polished.

Released theatrically in Disney 3D, Tangled comes to home video in Blu-ray 3D (for those who have it) and the rest of us commoners get to deal with a standard flat 2D Blu-ray.  Of course, that's not a bad thing - the transfer is stellar.  Like nearly every other Disney Animation Blu-ray release before it, Tangled is a delight to behold. The lighting is soft, and colors give off an appropriate golden warmth.  It's a testament to the art direction that they didn't go overboard trying to emulate a photorealistic look, but rather kept things primarily in the realm of Pixar territory, with incredibly detailed textures and likable character design that make the world of Tangled one you can almost touch.  The highlight is, naturally, the hair simulations which move and sport incredible realism and detail.  When things are darker (night scenes, underwater cave scenes, etc.), the transfer gets a little weaker, with some occasional banding (there are only so many color values I suppose).  Still, Tangled looks phenomenal.

And it sounds phenomenal, too.  An English DTS-HD MA 7.1 audio track leads the way, with a highly immersive sound mix.  Dialogue is clear, Alan Menken's music washes over us from the surrounds, and well placed and highly dynamic sound effects (your subwoofer will definitely get a bit of a workout during the action scenes) all lend to the acoustic journey through the film.

Hitting home video a mere four months after released in theaters, Tangled comes with a small and decent selection of extras, but is clearly begging for more.  Three "Deleted Scenes" (HD, 12.5-minutes) are introduced by co-directors Nathan Greno and Byron Howard. These are presented in a storyboard phase, since they never got animated.  Two "Original Storybook Openings" (HD, 8-minutes) are shown, giving us a more 'traditional' Disney opening to the film, instead of the narrated prologue they ended up using.  "50th Animated Feature Countdown" (HD, 2-minutes) gives us a quick look at the  legacy of Walt Disney Feature Animation by showing us brief glimpses at ever animated feature the studio has done.  Two "Extended Songs" (HD, 8-minutes) are presented in rough form, again with director introductions: "When Will My Life Begin" and "Mother Knows Best".  It's a shame that Alan Menken has no involvement at all with these supplements.

In fact, Menken is noticeably missing from "Untangled: The Making of a Fairy Tale" (HD, 12.5-minutes), a rather short look at the making of Tangled.  Hosted by stars Mandy Moore and Zachary Levi, it's a brief look at the production of the movie, how it relates to other Disney projects, character design, and a little bit of a look at the technology advances utilized to do the hair simulation.  Unfortunately nothing was discussed about the music or songs, which is odd considering how high-profile Menken's involvement was at the time of the film's release.  While no trailers are included, "Tangled Teasers" (HD, 9-minutes) provide a bevy of parody teases for the film.

Finally, a short "Discover Blu-ray 3D with Timon & Pumbaa" (HD, 4.5-minutes) talks about the next generation of home entertainment, and an ad for Disney Digital Copy - "Learn How to Take Your Favorite Movies on the Go" (HD, 1-minute) - round out the supplements.  I wonder if down the road there will be a more substantive release of Tangled, with commentary, more in-depth documentary, and even Disney Second Screen…. But I have a feeling that this might be all we'll get.

Tangled is a fun movie that fits nicely within the Disney Animation canon.  A good adventure story based on a classic fairy tale, it has likable leads, a crafty villain, a touching romantic aspect, and a delightful audio and video presentation.  If only it had more extras, this would be a must-have.  Instead, if you've seen Tangled, you can consider picking it up - otherwise, give it a rent first.