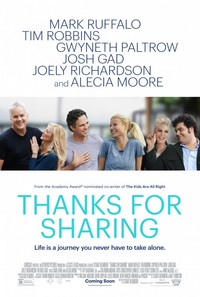 Review: Thanks for Sharing

Thanks for Sharing is first and foremost a movie about addiction. It does not moralize, demonize or glorify it. Instead, it shows us what addiction is, plain and simple.

The story follows several sex addicts in various phases of their lives: from a the recovered turned mentor who is still married to his wife, to the newbie addict who is forced to deal with his addiction because of a court order. As we follow these characters' lives, one thing becomes clear: there is absolutely nothing sexy about about sex addiction.

For anyone who has struggled with addiction or know someone who has, Thanks for Sharing is cathartic. It is a healthy reminder of what addiction is and that its self-destructive nature is absolute. Even for those who have only ever tried to break a bad habit, there will be plenty of moments in the movie that will ring true.

This is close to as good as naturalism can be, and writer and first time director Stuart Blumberg—who co-wrote The Kids Are All Right—is in familiar territory. The comedic moments work well and are contrasted with scenes of heavy emotions that manage to draw you into the characters and make you want to root for them.

The film's darkest moment occurs early in movie when Josh Gad's character, an overweight sex and pornography addicted medical doctor, stuffs his face with donuts in one lonely scene of desperation. This moment perfectly epitomizes the theme of the nature of addiction because we see, in just the expressions on his face, that what he is doing is completely self destructive, that he cannot stop himself—and that he knows it.

The movie does cheat its way through some transitions, which mostly consist of playing a song or background score while characters are walking down the street. Credited with "additional music," Craig Wedren scores an unfortunately overbearing and out of place "streetwalking" percussion track that does more harm than good. Comedy must be authentic, and beating the audience over the head with a loud drum is off putting best and patronizing at worst.

The song choices are strong and well placed, and kudos are in order for music supervisor Robin Urdang. The original score by Christopher Lennertz—mostly played during the serious moments—is subtle and well placed. Look for both the soundtrack album, which features some nice discoveries such as the song "Hero," as well as Lennertz's original score album, both released by Milan Records.

Thanks for Sharing may not be the most inspiring movie of the year, but it should prove valuable to anyone who has dealt with addiction in some form, whether with oneself or with someone else. The ensemble cast comes together well, which can be challenging for a movie with this many prominent characters. Director Stuart Blumberg shows us what independent film is all about and reminds us why a trip to your local one- or two-screen theater (or overpriced trendy theater, as the case may be) has its place.