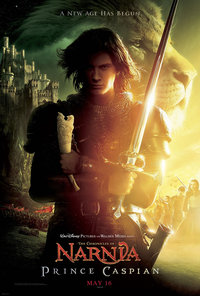 The Chronicles of Narnia: Prince Caspian

Two and a half years after the highly successful film adaptation of C.S. Lewis\'s children\'s fantasy novel The Chronicles of Narnia: The Lion, The Witch and The Wardrobe comes the next chapter in the saga, The Chronicles of Narnia: Prince Caspian. It\'s over 1,000 years since the events of the last film. Narnia is a darker place now; the mystical creatures have all retreated into the woods, and become stories of legend and superstition. The Telmarines (a race of men) have taken over Narnia and the evil King Miraz (Sergio Castellitto) rules with an iron fist - having dispatched of his brother and taken the throne, and removing any possible threats to his power. When his wife finally gives birth to a son, he sees no need to keep his nephew Prince Caspian (Ben Barnes) around, and arranges to have him killed. But Caspian escapes into the woods, and with the help of Susan\'s magical horn (from the first film) calls back the \"Kings and Queens of old\", the four Pevensie children. Only a year has passed in our world since the last film, and the Pevensies are having a bit of a hard time being children again, with Peter constantly getting into fights. But they\'re whisked back to Narnia, and find that much has changed. With the help of some dwarves (considered evil in the first film) they eventually meet up with Caspian and the other Narnians and soon a battle for control of Narnia will take place so Prince Caspian can take his rightful place at the throne.

The film is definitely a step up from the previous one; director Andrew Adamson has learned from the mistakes of the previous film and delivers an entertaining and darker film. The Christian allegory returns, as young Lucy (Georgie Henley) keeps seeing Aslan, but no one else does - prompting a discussion about faith and \"return\". Certainly not subtle, but not proselytizing either. The first third of the film - especially with the children\'s return to Narnia - feels a bit cheesy at times and a little over-saccharine, but once everyone is firmly established, things start to move forward at a steady pace. A neat sequence involving Reepicheep the swashbuckling mouse (voiced by Eddie Izzard) and his troops of fellow rodents infiltrating the Miraz\'s castle is fun, and the battle sequences are definitely a step up from the previous film. While the film is rated PG, this is a violence-filled movie, with a rather high (but never graphic) body count. Unlike the first film, the children actually feel like they\'re in peril, which makes things a bit more exciting especially during a rather intense duel near the climax of the film.

The acting is alright but nothing spectacular - the kids are decent but still feel like they\'re trying a bit too hard, and the bad guys are all played by Italians and Mexican actors, and they all look (and sound) alike - even Ben Barnes (Prince Caspian) sounds like a young Antonio Banderas. The visual effects are markedly better, and the music by Harry Gregson-Williams brings back the familiar themes from the first film, along with some new ones. It\'s a darker score, effectively mirroring the overall tone of the film. Ultimately a coming-of-age story, Prince Caspian is a solid film that runs a tad too long (144-minutes!) and while some of the magic from the first film is gone, it\'s about a Narnia that has fallen into a dark time, and well worth checking out.