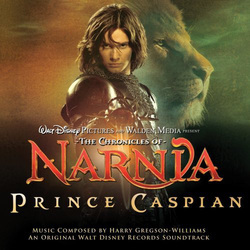 The Chronicles of Narnia: Prince Caspian

With The Chronicle of Narnia: Prince Caspian moves the Narnia series further toward the Action/Adventure genre and slightly away from the children's film genre. The film is darker, the characters are put in more dangerous situations, and the primary components are battles rather than journeys, as in The Lion, The Witch, and The Wardrobe.

Harry Gregson-Williams' score follows this progression and continues the thematic development he began in the first film. The Narnia theme returns along with a host of others. The Heroic theme becomes the most prominent motif in the film while the Children's theme takes a backseat. Gregson-Williams also wrote new themes for the Prince Caspian and Reepicheep characters, as well as the new villains, the Telmarines. Overall, the score is, as expected, very good. Unfortunately, the soundtrack album does not stand up to The Lion, The Witch, and The Wardrobe.

The film is paced differently than the book, omitting the tale of Caspian's upbringing and starting with his escape from Miraz rather than with the Pevensie's return at the train station. Where the first soundtrack saw a slow progression of the thematic development as the journey through Narnia unfolded, the structure of the Prince Caspian story does not allow for that. The album opens with "Prince Caspian Flees", introducing the Caspian theme over racing strings. This cue also serves as the main title sequence over the midnight chase scene through the forest. Hints of the Heroic theme are interwoven and toward the end of the cue, a new musical element is introduced, a staccato string rhythm. This moves along under a chanting choir and soaring horns. Caspian's theme is one of the highlights of the score, but does not return until near the end of the album.

A solo horn slowly builds into the first statement of the Narnia theme in the "The Kings and Queens of Old", followed by the Children's theme and the chime motif from the first film. The Heroic theme sees many different variations in this score, rather than being limited to bold brass statements in LWW. Examples include "Journey to Aslan's How" and "Arrival at Aslan's How", with statements performed by the strings. The latter, however, builds into a choir and brass cue reminiscent of the first film. These first few tracks set the stage for the remainder of the album, which is primarily battle music. This is not a bad thing. Gregson-Williams showed that he is quite adept at orchestral action scoring in Kingdom of Heaven and The Lion, The Witch, and The Wardrobe, especially with his integration of choir. But it does make for a less varied score in terms of styles.

The first and possibly most impressive action cue is "Raid on the Castle", which includes an action choir motif over pulsing percussion. I do have to admit that at one point in this cue, some of the percussion stands out a bit too much as electronic, but is soon replaced with drums. The development of themes in this score is less focused on the new themes and more on reworking the original ones. This action cue shows the versatility of the Heroic theme, especially as snippets of it are woven in and out of the action motifs. After the pounding opening, the track breaks into a soaring brass cue, which is actually an unused piece from the first film, but fits even better into this sequence. A bold statement of the Narnia theme can be heard toward the end of the track on the trumpets, which is the first of its kind for this theme. The theme returns to end the track on the horn. The middle part of the track contains a re-orchestration of part of "The Battle" from the first score. This appears again in "Sorcery and Sudden Vengeance". There was a large requirement for battle music in this film, as mentioned before, so I have no criticism of him reusing cues. It is unfortunate that these made it onto the album while a good amount of new material was left off, but these pieces are integrated into action sequences and hard to separate.

More subtle variations on the Heroic theme continue into "The Duel". The Caspian theme finally returns, along with the eighth-note underscore, in "Battle at Aslan's How". This is really the climax and the standout action cue because the Caspian theme is finally given its triumphant statement, rising over the low choir and percussion. The end of the track, however, once again moves into a moment from LWW's "The Battle". The Caspian theme also opens "Return of the Lion" with the full orchestra and choir and is interwoven with the Heroic theme. A full, finale-sounding statement of the Heroic theme follows with the choir followed by a second statement at a faster pace with the theme moving into the trombones. The final score track, "The Door in the Air" brings back the electric violin heard in the first film, performed by Hugh Marsh. The dancing strings then move into a cue similar to the last cue on the first soundtrack. The score portion closes with somber statements of the Children's theme and the Narnia theme.

Like the first soundtrack, the album ends with four songs. Generally, they are in the same vein as on the first album, but I don't find them quite as enjoyable. Gregson-Williams wrote two of the LWW songs, one by Lisbeth Scott and one by Imogen Heap. His contribution to Prince Caspian is in arranging and producing Regina Spektor's "The Call", which is played over the end titles. The other songs seem tacked on. At least Alanis Morissettes song, "Wunderkind" from LWW, had lyrics tied into the film and contained the magical feeling of Lucy walking into Narnia. I did not feel the same for the songs tacked onto the Prince Caspian album.

The soundtrack album has some unfortunate problems, including some unnecessary songs and an abundance of battle music. However, I do have to say that the score will probably end up being one of my favorites of the year. There is some really great music not on the album, such as the muted trumpet Reepicheep theme and some slower moments where Lucy is searching the forest for Aslan. The Prince Caspian theme is also rarely heard until the end, but that's more because Caspian didn't really have much to do and the action was mostly given to Peter. Fans of the first score will love it, as all the original themes return in many forms. This is one of the most impressive parts of Harry Gregson-Williams' work here, the integration of new statements of the themes into new styles of battle music. His use of the choir is also up a notch. This score was recorded in London and both the performance and the recording are great. Cues like "Prince Caspian Flees" and "Raid on the Castle" alone make this an album worth checking out.