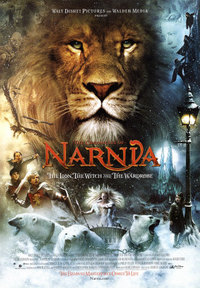 The Chronicles of Narnia: The Lion, The Witch and The Wardrobe

Review: Chronicles of Narnia: The Lion, The Witch and The Wardrobe (Blu-ray), The

Recently released on Blu-ray disc just in time to coincide with the theatrical sequel is 2005\'s The Chronicles of Narnia: The Lion, The Witch and The Wardrobe. The two disc set features all of the extras on the previous original theatrical DVD release, as well as a few little Blu-ray bonuses.

The film\'s story is well known by now: the four Pevensie children are whisked away to the magical land of Narnia (which is inhabited by fawns, centaurs, talking animals, and other fantastical creatures) which is currently under the spell of everlasting winter at the hand of the evil White Witch (Tilda Swinton). With the help of the great lion Aslan (voiced by Liam Neeson) the children must help the Narnian\'s break free of the witch\'s spell. Running about 142-minutes long, the film is never slow or boring, but suffers from a feeling that almost everything was done too easily. That\'s not a completely fair statement, since the filmmakers obviously put a lot of effort into it - I just meant thta things seem to take the expected path every step along the way. The children never truly feel in peril, and things seem rather simplified story-wise, although the Christianity allegories still remain faithful to the novel. The children who play the leads are quite good, and the main message points of C.S. Lewis\'s novel comes through quite clearly.

Director Andrew Adamson did a rather nice job with the film considering it was his first live-action feature (he had done the Shrek films previously), and so it\'s easy to give him a little leeway. With his background in animation, the Oscar-nominated visual effects are certainly a highlight, and rightfully so. The music, of course, is a knock-out. Harry Gregson-Williams does an excellent job with thematic material, and by the time the battle starts up, your heart will be racing. It\'s big, it\'s epic, and it\'s memorable. Themes established here show up again in Prince Caspian, effectively enough.

The image quality on the Blu-ray release is a major step above the previous two DVD releases. Where the original release suffered from a bit of compression, and the "extended edition" had the same problem (as well as some rather incomplete-looking visual effects) here the transfer is impeccable. There is a little more grain in the darker sequences, but the colors in the daylight scenes look great. The lead-up to the climactic battle is saturated and very natural looking - letting the visual effects shine. This is certainly a reference grade transfer.

Audio is presented in uncompressed English 5.1, as well as English, French and Spanish 5.1 Dolby Digital. It sounds generally excellent, with a large dynamic range that sounds crisp and allows dialogue to come through cleanly, never overwhelmed by the sound effects. Even the music (usually getting buried under the cacophony) is heard clearly during the battle sequence.

The two commentary tracks from the previous two-disc release are included here: Director Adamson and the child actors talk in a very engaging discussion, and the other has Adamson with producer Mark Johnson and production designer Robert Ford in a rather technical commentary. A blooper reel and trivia track round out the disc.

The second disc is nearly identical to the second disc of the two-disc release, and includes some featurettes on Adamson journey as a director making the film, the child actors, the creatures of Narnia, and an interactive map and timeline. There\'s also a great wealth of featurettes in "Evolution of an Epic", focusing on the different aspects of the filmmaking process. Within that section, there\'s a nice featurette talking with Harry Gregson-Williams about his music for the film, and his scoring approach. He discusses coming up with some of the themes, as well as the Narnian Lullaby sequence - but then it ends, leaving us wanting more and wondering why nothing was discussed about the rest of the score, and the impressive battle sequence music. There is some footage from the September 2005 scoring sessions, but nothing from the October sessions where the bulk of the score was recorded. The only new Blu-ray exclusive extra is the "Battle for Narnia", a BD-Java interactive game that lets you fight role-playing battles to save Narnia from the evil White Witch.

This is the third time the film has (in various forms) been released on home video (counting the two previous DVD versions) and they have yet to include trailers for the actual film. They include trailers (on the first disc) for other films, including The Chronicles of Narnia: Prince Caspian, but nothing from this one! Also, the extended cut could have been presented through seamless branching, and the pop-up video track from that same 4-disc set could have been integrated as well. There are other extras missing from this Blu-ray release that were on the fourth disc of the "extended edition".

I was frustrated that the documentaries on the two disc and four-disc sets were presented in letterboxed 4:3 video, clearly it was all available in widescreen, and likely even shot in HD. So it\'s even more annoying to see that the extras are presented in letterboxed 4:3 video on the Blu-ray release. A missed opportunity. As far as HD presentations go, the video and audio of The Chronicles of Narnia: The Lion, The Witch and The Wardrobe are all top notch. The extras are incomplete but certainly hearty enough that if you don\'t have the other releases, it\'s worth picking up. I hope that they release a more definitive seamless-branching release in the future, but for now this Blu-ray is definitely worth the upgrade from the previous 2-disc DVD release.