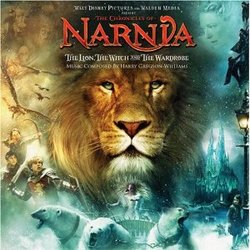 The Chronicles of Narnia: The Lion, The Witch and The Wardrobe

Review: The Chronicles of Narnia: The Lion, The Witch and The Wardrobe

I first heard Harry Gregson-Williams' main theme for The Chronicles of Narnia: The Lion, The Witch and The Wardrobe a few months ago and was immediately taken into a world of magic, adventure, and wonder. The complex theme that represents the land of Narnia is used sparsely on the album, but each time, draws the listener's attention into the music; this is not a theme that can be ignored. It is first introduced in "Evacuating London" during the main title sequence as a counter melody to Lisbeth Scott's vocals and the theme for the Pevensie children. The first full statement of the theme occurs in "The Wardrobe" when the land of Narnia is first seen. Additionally, each time it is played, Gregson-Williams alters the orchestration or the pattern of the theme, so it evolves with the film.

While The Lion, the Witch, and The Wardrobe is an adventure film and, do a degree, a children's film, Gregson-Williams' score is as far removed from the two genres he built his career on—action and animation—as it could get. While influences from his past works such as Spy Game, Sinbad: Legend of the Seven Seas, Shrek, and especially Kingdom of Heaven, are evident in his latest effort, The Chronicles of Narnia takes off in a new direction. Gregson-Williams created a soundscape for the land of Narnia that is instantly memorable and perfectly fitting. As the film progresses from a quiet, frozen world to one of sunlit battlefields, the score blossoms into some truly amazing orchestral and choral music. To contrast the numerous musical idea sin the score, compare the electric violin-dominated "Lucy Meets Mr. Tumnus" to the bright, upbeat statements of the themes in the final track, "Only the Beginning of the Adventure".

Besides the Narnia theme, Harry Gregson-Williams wrote two other prominent themes for the film (in addition to multiple minor themes and motifs), both of which are used very frequently. The first is the Children's Theme, which is used in almost every track on the album and in many forms, but mostly dominates the first half of the film. The second theme is similar in its note progression, but used in a completely different way. This is the Heroic theme, which is often used for Peter or Aslan. Its first appearance is in "To Aslan's Camp" and the theme is normally performed by the brass in a triumphant or adventurous style. This theme begins to take over during the second part of the film when Aslan's army and the children unite to defeat the White Witch. The best use of the theme is in the beginning of "The Battle" where it passes between the low brass and the trumpets in a repeated pattern backed by the choir. This cue is both the climax and the highlight of the score.

The score for The Lion, The Witch, and The Wardrobe has more than just strong themes. There are many musical ideas and solo performances here that make the music unique and constantly interesting. These include the use of the duduk as Mr. Tumnus' pipe in "A Narnia Lullaby", Tibetan singers and heavy percussion for "Stone Table", Lisbeth Scott's ethereal vocals over many scenes including the main titles in "Evacuating London", and High Marsh's electric violin. To be sure, the latter two appear in almost every one of Gregson-Williams' scores, but are used for a different effect here. The electric violin has its strongest presence in "Lucy Meets Mr. Tumnus" and adds a chill to the music for the wintery Narnia. The other notable cue is when the violin performs the heroic cue at the beginning of "Stone Table" in a very haunting and unheroic style. Another notable moment in the score is the hints of the Narnia theme as a counter melody during the main titles, which are encompassed in the cue "Evacuating London". The final statement of the theme in the cue is on the French horn and it is a very powerful moment that is built up to through the cue from the piano solo performance of the children's theme at the beginning.

The climactic track, "The Battle," as I said before, is easily the highlight of the score. The chorus and brass performances here are outstanding. The cue sounds a lot like some battle moments from Kingdom of Heaven, but Gregson-Williams improved upon the sound and entwined his Narnia themes much more than he did for the Crusades film. The percussion set the tone for this cue while the orchestra and chorus play over it. This is not the chaotic pounding percussion so often heard in action sequences, but an almost restrained, yet moving, steady rhythm of multiple types of drums, including timpani, snare, and wood drums. This sets a strong foundation for the choir's most prominent performance, which, unlike Kingdom of Heaven, has a smaller, though still significant role in the score. In this climactic cue, we hear the most varied forms of the Heroic and Children's themes that blend together with and play over the rest of the action music. The concluding score track, "Only the Beginning of the Adventure" reprises the main themes with an uplifting tone; the last appearance of the electric violin takes on a less suspenseful tone here and leads into the final, moving statement of the Heroic theme.

The score portion of the album is a bit shorter than I would have liked, given the size and scope of the production, but four songs are added on at the end to fill out the disc. Harry Gregson-Williams was involved with two of these, "Can't Take It In" performed by Imogen Heap and "Where" performed by Lisbeth Scott, and the latter incorporates the Children's theme into the orchestrations. The other two songs are probably not necessary for the soundtrack. However, I should mention that the Alanis Morissette song, "Wunderkind", is actually decent and was written specifically for the film; the lyrics are from Lucy's point of view. Songs aside, The Lion, The Witch, and The Wardrobe is one of the best scores this year and truly shows Gregson-Williams's growth and talent as a composer of many different styles of music.