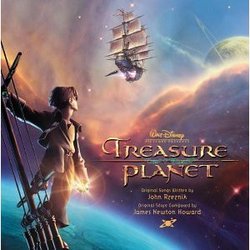 Following his exceptional work for Disney's Dinosaur and Atlantis: The Lost Empire, James Newton Howard had set the bar high for himself for Treasure Planet. While he does not quite pull off the magic of the first two, his third collaboration with Disney animation in as many years is still some of Howard's best orchestral action music. The score opens with a gentle fiddle solo performed by Scottish violinist Alasdair Fraser which quickly races into the action with a rousing electric guitar solo that builds into the bold main theme with a full brass section. The theme is on par with his action themes from Waterworld and Atlantis, but is used much more frequently throughout the score than in the past, as it stands as the main theme rather than a secondary action theme. Multiple variations in the theme filter through the album ("To the Spaceport", "Billy Bones", "The Launch").

What makes Treasure Planet stand out from a regular orchestral action score are the unique instrumentation ideas Howard throws in, such as the electric guitar. A second is the Celtic feel. The character of Silver is scored with a jig-like theme that appears in "Silver" and "Silver Bargains." Finally, there is Jim's theme, which was presented in the first cue and is heard again in full in "Silver Leaves." While some of the middle cues on the album are generally unremarkable, it is the final three cues that really stand out. Here, Howard takes all the musical ideas from the first portions of the score and throws them all together. The electric guitar returns in "Jim Saves the Crew" and builds to a stunning finale with a triumphant performance of the main theme. The final cue, "Silver Leaves" returns to the Celtic style and was co-composed by Alasdair Fraser; it brings together Jim's theme, Silver's jig theme, and the main theme in a more playful version. The album also contains two pop songs by the Goo Goo Dolls' John Rzeznik, which add to the electric guitar feel Howard hints at a few times, accompanying one particular scene quite well. Howard shows off his versatility once again by adding elements to the animated action film that make the score unique.