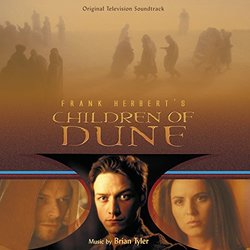 Performed by
The Czech Philharmonic

Graeme Revell's score for the Sci Fi Channel's Dune (2000) was somewhat of a poor accompaniment to the epic tale by Frank Herbert brought to life in a five hour mini-series. However, the series did well and Sci Fi came back in 2003 with Children of Dune, which combined the two sequel books to Dune - Dune Messiah and Children of Dune - in another three-part series. However, up-and-coming talent Brian Tyler was hired to provide the music this second time around. Tyler surpassed all expectations and Children of Dune became one of the most popular soundtracks of 2003. The score is epic in scope along the lines of Howard Shore's The Lord of the Rings and creates a soundscape worthy of the full breadth of Herbert's science fiction vision.

While Revell established an ethnic soundscape for the Dune world in the first mini-series, Tyler takes it further by adding more ethnic instruments, some of which he made himself and performed along with percussion and vocals. The album is not in film order because the series takes a while to get moving and the overall play of the score as a listening experience is better with the action cues spaced out. The highlight of the score is "Inama Nushif", written in Herbert's Fremen language, which was made popular in the TV spots for the series. The cue accompanies a montage at the end of Part I in which a few characters are killed off and others introduced.

The album opens with "Summon the Worms" with a powerful thematic performance of the main theme in the brass and racing strings, which appears again in "Jihad". Much of the score consists of ethnic percussion, woodwinds, and vocals, but Tyler never lets it fade into the filler music that much of Revell's score ended up being, and some theme is never far away. Some standout cues include the percussive "My Skin Is Not My Own", the fanfare of "The Arrival of Lady Jessica", and the thematic "Main Titles (House Atreides)". Tyler's Children of Dune has been criticized for sounding too much like Hans Zimmer's Gladiator due to the extensive use of the duduk, as in "The Golden Path", but the instrument is an important sound for this score and the similarities end there. The score ends with a series of cues comprised of quiet performances of the themes, including "Farewell", an instrumental version of "Inama Nushif" and "Children of Dune", a version of the "Jihad" theme on acoustic guitar. Children of Dune elevated Tyler above the "new composer" status while breaking him out of the typecast horror composer. Overall, it is one of the best scores of 2003.