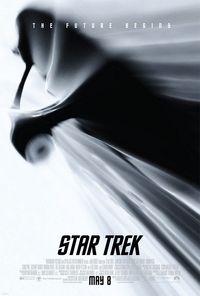 Lately, anything Star Trek related has been mired in over 40 years of canon, with fans shrieking every time something doesn\'t quite match the established narrative. Thankfully, with J.J Abrams taking on Gene Roddenberry\'s baby, there\'s a few twists and turns that not only give him the freedom to do whatever the heck he wants without worrying about the fans, but he also delivers a Trek film that actually delivers fun, thrills, excitement, and a nice wink-and-nod to the original cast.

When rogue Romulan Nero (Eric Bana) emerges from a space anomoly and destroys the U.S.S. Kelvin (helmed for a few short minutes by George Kirk), he changes the direction of history. His son, James T. Kirk (Chris Pine) grows up to be a bit of a rebellious farm boy, stealing his stepfather\'s car, hitting on anything with two breasts (in this case Uhura, played by Zoe Saldana), and eventually getting into bar fights. After one such brawl, Captain Pike (Bruce Greenwood) tries to convince Kirk to get some order in his life, and join Starfleet - since he has the capability to be a great leader like his father. Meanwhile on Vulcan, the half-human, half-vulcan Spock (Zachary Quinto) is trying to keep his emotions in check. His vulcan father (Ben Cross) tries to explain how logic essentially led him to marry a human (Winona Ryder), but the racism he encounters from "pure" vulcans only further pushes Spock to join Starfleet.

Soon everyone is in Starfleet, and when Kirk is accused of cheating to beat a no-win scenario test (designed by Spock) the two immediately have resentment towards each other. But there\'s a distress call from Vulcan, and Kirk\'s good friend, the bitter Dr. Leonard McCoy (Karl Urband), manages to get him on board the new U.S.S. Enterprise, commanded by Captain Pike. There we meet Sulu (John Cho) and Chekov (Anton Yelchin). When it turns out that the situation at Vulcan is more complicated than anyone envisioned, and Pike is captured by Nero, Kirk tries to take charge, but Spock is the one in command.

There\'s a lot more going on than what I\'ve talked about here, but I really don\'t want to give any more away. The tagline that "this isn\'t your father\'s Star Trek" is quite accurate. J.J. Abrams shot the film for a modern audience, and Transformers scribes Roberto Orci and Alex Kurtzman infuse the script with humor, action, and nice dialog winks to classic character moments. The action sequences are really well done, and the visual effects are phenomenal. The acting isn\'t quite the best, but Karl Urband steals the show, and Zachary Quinto is perfect as a younger Spock. Simon Pegg shows up as Scotty, but seems a bit too hammy for the role.

Abrams\' regular composer Michael Giacchino delivers a score that works for the film, but the main theme is a bit repetitive and it doesn\'t quite reach the levels that Jerry Goldsmith had achieved for the Trek series. Star Trek might have a few small plot holes here or there, but it\'s set up in such a way that it works effectively as a prequel, and as mentioned earlier, there\'s a nice twist that allows them to respect the fans but go in their own direction. It remains to be seen whether this film will breathe new life to the franchise, but it certainly is one hell of a ride.