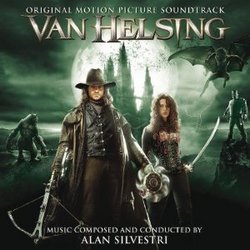 It's not often that the score to a truly wretched piece of filmmaking ends up being really good. Usually they happen with some Goldsmith films, but in this particular case, it happened to Alan Silvestri. After his anticipated score to Pirates of the Caribbean: The Curse of the Black Pearl was tossed out last summer, fans have been waiting for his score to Van Helsing with baited breath. Knowing how much of a powerhouse job he did with Stephen Sommers' The Mummy Returns, it only seemed fair that Silvestri would knock us out of our boots once again. But while this score is about as big as anything you would expect, the sequencing on the album leaves just a little to be desired, especially when it comes to the lack of any breaks, and the limited usage of the love theme which factored so heavily in the film.

In a plot that adequately ruins the mythos of three classic Universal monsters, Dracula needs the life-giving power that Frankenstein's monster holds, so he can raise his child-spawn from their stillborn states. He tries to use the Wolfman, but it doesn't really work as well. Enter Van Helsing (Hugh Jackman), a hit man for a secret division of the Vatican, who is sent to Transylvania to destroy Dracula with the help of Anna Valerious (Kate Beckinsale), the last in a bloodline of locals who have pledged to destroy Dracula - or be denied entrance to Heaven.

The film starts out promising enough, with a very cool James Whale-inspired pre-title sequence, in black and white. This encompasses the first two cues of the album: "Transylvania 1887" and "Burn it Down". Comprised of a big chanting chorus and full-blown orchestra, the main theme heard in here is used to signify the monsters, and will show up many times in the film. It's grand, it's epic, and it's a great start to the album. Interestingly enough, as the film progresses, the story, acting, and pretty much everything starts to degrade in quality. By the end of the film, you're laughing at the absurdity of what you're watching on screen. However, the music stays constantly high, and that includes both quality as well as intensity.

"Journey to Transylvania" is where we first hear Van Helsing's theme, a driving rhythm, with acoustic guitar in the background and occasional choral chanting. There are a few cues of general mayhem and action, all in the grandiose Silvestri style: "Attacking Brides", "Useless Crucifix", and "Who Are They To Judge?" The score really hits the top in some dramatic cues as "Dracula's Nursery" and "Transylvanian Horses", which plays out more like a classic swashbuckling score than anything you'd expect to hear from a modern film. But that's where Silvestri excels, and this album is full of that kind of musical writing.

While there are a few moments of calm, and even a bit of romanticism (the end of "Who Are They To Judge" and "Reunited"), there's a lot more of it in the film that doesn't appear on the album, and it would have been nicer to mix it up a bit, so we weren't exposed to musical bombast for most of the album. "All Hallow's Eve Ball" starts out like a source cue, during the Ballroom scene at a palace in Belgrade. However, once the palace is revealed to be Dracula's other home, the music becomes yet another action cue. The big final conflict is resolved in "Final Battle", and it's one heck of a cue. Running over six minutes long, this one will just keep you on your toes as Silvestri pulls out all the stops.

Running about 43-minutes in length, Van Helsing would have benefited from some more of the softer romantic cues, but still, this is one heck of an album. It's a real shame that such a big score would find itself attached to one of the worst films I've seen this year, but hey - they can't all be winners! Expect the film to do well at the box office initially, before free-falling off in the coming weeks. Hopefully the soundtrack will fare better!