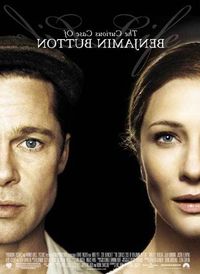 The Curious Case of Benjamin Button

David Fincher\'s first PG-13 film, The Curious Case of Benjamin Button, is based on a short story by noted author F. Scott Fitzgerald.  A rather interesting biographically-laid out story told through flashback, The Curious Case of Benjamin Button is about the life and times of a Mr. Benjamin Button (Brad Pitt) - who was \"born under unusual circumstances\".  Dying from cancer in 2005, the very elderly Daisy (Cate Blanchett) has her daughter Caroline read to her from Benjamin\'s diary.  Born on the day the \"Great War\" ended- and subsequently abandoned by his wealthy father (his mother died during childbirth), Benjamin was raised at a nursing home by the loving care-worker Queenie (Taraji P. Henson).  No one expected Benjamin to live, as he was a newborn with all of the physical ailments and characteristics of an 80-year old man, and yet as the years began to pass, Benjamin in fact began to look more youthful.  Mistaken for an older man when he was really just a child, Benjamin learns a lot about life from the octogenarian residents of the nursing home as well as the people who visit the home.  When he meets Daisy, a young girl whose grandmother is residing at the home, Benjamin is immediately smitten. But given the circumstances of his appearances, the impression of an improper relationship keeps them from being together.  When he was 17 years old (and looked in his 60s), Benjamin leaves home to travel the world working on a tugboat steamer.  His explorations take him to Russia, where he has a relationship with the wife of a British diplomat (Tilda Swinton), but his heart always belongs to Daisy - and over the years, their paths cross, and the story focuses on their ultimate intertwined destinies.

The Curious Case of Benjamin Button is a slow-paced film that takes its time to get to the points.  The ultimate message of the movie is one about living life to the fullest, and taking risks if the path that you\'re currently on doesn\'t lead to where you want to go.  I found the sub-plot about Benjamin\'s father\'s ultimate redemption and the father-son relationship between him and Benjamin to be most satisfying, with some excellent and touching moments.  The movie covers a number of eras, from the 1930s, to World War II, to Post-War America, to the free-loving 1960s, and even a bit of the 1980s.  All of these periods are realistically portrayed, through the wonderful production and sound design.

Visual effects and make-up impressively accentuate the performances by Pitt and Blanchett, who play almost all of the various age ranges necessary (except the pre-pubescent roles), and there is certainly a Forrest Gump sensibility to the way the narration furthers the story, covering the bulk of Benjamin\'s life and legacy through the reading of his diary (supplemented with side information by Daisy).  Shot by Claudio Miranda, the film has a golden hue to it, with natural light keeping things dim yet visible during the night sequences.  The music by Alexandre Desplat is delicate and emotional, staying in the background yet providing effective heart-tugs when appropriate. It is likely to be a major contender come Oscar-time.

At 167-minutes the film runs a little on the long side, but The Curious Case of Benjamin Button is certainly worth your time, and a highly enjoyable journey through a man\'s life.