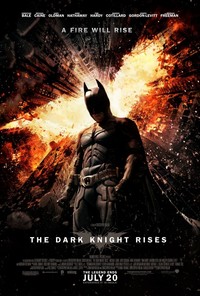 Eight years after the events in The Dark Knight, Batman (Christian Bale) has vanished, having taken the fall for Harvey Dent's murder. Police Commissioner Gordon (Gary Oldman) has helped push the passage of the Dent Act, which rounded up most of the criminal elements in Gotham City, and Bruce Wayne has been reclusive with only his trusted butler Alfred (Michael Caine) to keep him safe. Wayne Industries is on the brink of bankruptcy, having invested heavily with Miranda Tate (Marion Cotillard) on a new form of fusion reactor which could provide the city with clean renewable energy, but Wayne mothballed the project—fearful that with minor adjustments the reactor could be turned into a nuclear device. These fears aren't unfounded, as Bane (Tom Hardy), an excommunicated member of the League of Shadows who intends to destroy Gotham with the reactor, abducts a Russian nuclear scientist who is able to convert the reactor into a weapon. When a series of seemingly unrelated crimes involving cat burglar Selena Kyle (Anne Hathaway) draws Bruce Wayne out of seclusion, he encounters Gotham City police officer John Blake (Joseph Gordon-Levitt), who thinks that something fishy is going on—something that requires the return of Batman. But after eight years in hiding, Batman is still a wanted fugitive and his confrontation with Bane could be the catalyst that results in the destruction of Gotham City.

Strong performances from Hardy and Hathaway keep things interesting and Caine has an excellent scene in which Alfred confronts Wayne, but for the most part it's not the acting that drives the film; it's the action sequences. When we get them, they're exciting, engaging, and (in IMAX), visually breathtaking. Cinematographer Wally Pfister's use of the IMAX camera is excellent, allowing us to see all the action without unnecessary shaky-cam or overzealous editing. The big confrontation between the Gotham City PD and the criminals toward the end of the film is great because they actually used thousands of extras. It's this dedication to authenticity that helps keep things grounded in reality (through all three films, really), and makes it all very exciting to watch. While much of the music is based on ideas from the first two film scores, Hans Zimmer's music also helps ratchet the energy up a notch with a new choral chant for Bane and a slinky seductive melody for Selena Kyle.

The Dark Knight Rises is, without a doubt, an ambitious and impressive film. Director Christopher Nolan's vision of how to bring about the end to this trilogy might not make everyone happy, but it's ultimately his film. He's trying to do too much at times and, like an adept juggler, manages to keep all the balls in the air—until one miss, and then it all comes crashing down. I specifically refer to the third act. (Caution, spoilers ahead!) After Bane has trapped the police officers in the sewers and Bruce Wayne is in some far-away exotic prison, months pass. But we barely get a sense of that, except when suddenly there is snow on the ground and the bomb is supposedly going to go off in a week. Forcing the audience to accept that someone whose back was broken (and had a vertebrae poking out!) healed completely in a few months and then somehow travelled back around the world to enter a city (unseen), which is quarantined by the military, is a bit of a large pill to swallow. But it's Nolan and I'll gladly swallow that pill.

The Blu-ray release of The Dark Knight Rises is presented in a modified form of the IMAX theatrical release. For the most part, the film is presented in a 2.40:1 aspect ratio, but when shots that were filmed in IMAX are presented, the screen opens up to show a cropped frame that fills your HD television screen with an image at 1.78:1. Unlike The Dark Knight, which I felt was too murky and lacking shadow definition, The Dark Knight Rises is much more enjoyable to look at and definitely has more detail in the blacks, but still not as much as I'd prefer (when compared to the film presentation). Wally Pfister's color palette is still on the bleaker side, with cool blue hues contrasted by warm oranges, but never lacking in detail. Shot on film, there is a somewhat noticeable difference (aside from the shifting aspect ratio) between the standard anamorphic material and the IMAX material, with the latter looking quite excellent and stunning in detail.

Another Batman movie and another reference-quality demo-worthy home theater sound mix. Presented in DTS-HD Master Audio 5.1 English, this is an audio track that will rumble your home and likely result in neighbors complaining. Your subwoofer and rear speakers will be getting a near-constant workout and Hans Zimmer's score makes an intentional effort to complement the sound effects. It's a balancing act that allows dialogue to be heard rather clearly during the loudest and most intense of action sequences and one that lets the music play in tandem with the sound effects, rather than fighting for sonic space.

Unlike The Dark Knight, the Blu-ray release of The Dark Knight Rises comes with a surprising amount of supplemental extras with a pretty in-depth look not just at the making of the film, but of many aspects of Batman as a franchise overall. Starting on Disc 2, we have the hour-long featurette, "The Batmobile" (HD, 58-min), which is a fascinating in-depth look at the different flavors of Batmobile that have been seen. From the comic book to the television shows (both live-action and "Batman: The Animated Series"), to the first quadrilogy (Burton and Schumacher), to the Nolan films, everything is explored and nothing is left untouched. Even better, they manage to get most of the principle filmmakers to discuss their approaches—definitely a worthwhile documentary.

We then tackle this last film in the Christopher Nolan trilogy, with a section appropriately called "Ending the Night." This is broken up into three sections: Production, Characters and Reflections. Inside "Production," we get twelve featurettes totaling an hour of behind-the-scenes explorations for each of the major sequences in the film. These include: "The Prologue: High-Altitude Hijacking" (HD, 8-min), "Return to the Batcave" (HD, 3.5-min), "Beneath Gotham" (HD, 2.5-min), "The Bat" (HD, 11-min), "Batman vs. Bane" (HD, 6-min), "Armory Accepted" (HD, 3.5-min), "Gameday Destruction" (HD, 7-min), "Demolishing a City Street" (HD, 4-min), "The Pit" (HD, 3-min), "The Chant" (which looks at Hans Zimmer's score) (HD, 5.5-min), "The War on Wall Street" (HD, 6.5-min), and finally "Race to the Reactor" (HD, 8-min). Unfortunately, there is no "Play All" function, which would have been handy.

In "Characters," we get three featurettes, one on each of the principle characters: "The Journey of Bruce Wayne" (HD, 9-min) looks at the evolution of Bruce Wayne/Batman throughout the three films; "Gotham's Reckoning" (HD, 10-min) looks at the filmmaker's approach to the character of Bane; "A Girl's Gotta Eat" (HD, 9.5-min) looks at Selena Kyle/Catwoman. All of these are pretty in-depth explorations of the characters with the filmmakers and actors discussing their approaches, what they tried that didn't work, and how it all fits within the larger scope of the messages of the trilogy. "Reflections" just gives us two featurettes: "Shadows & Light in Large Format" (HD, 5.5-min) looks at the shooting process and how the scope and scale came from locations, set decoration and the selective use of IMAX, and "The End of a Legend" (HD, 9-min) features the filmmakers discussing the conclusion to their trilogy, how things have changed over the course of three films, and how it affected them personally as well as professionally.

"Trailer Archive" (HD, 8.5-min) gives us four theatrical trailers (and the "Play All" button that has been eluding us for the rest of the disc!), and "Print Campaign Art Gallery" had 39 images from the marketing campaign. When you toss in Disc 1, you can use the "Dark Knight Rises FX" app on your iPad as a "Second Screen" device. This allows you to watch the film with trivia, behind-the-scenes photos, featurettes (mirroring those in the "Production" section on Disc 2), time-lapse set construction videos, scene explorations, and more.

Now a quick word about the theatrical vs. the IMAX presentation. Technically, if you wanted to watch the 2.40:1 aspect ratio theatrical presentation, you could only do so on the DVD included or the Digital Copy. On your iPad, that's not so impressive. But if you sign up with Vudu.com and connect your Ultraviolet account to it, you can watch The Dark Knight Rises in HDX—which gives you 1080p, 5.1 Dolby Digital surround sound. And it's the theatrical presentation. So while it's not available on Blu-ray, you can still find a way to watch the original theatrical version if you don't like the shifting aspect ratios.

The Dark Knight Rises was destined to be compared to The Dark Knight the moment they announced they were making it. That the story doesn't quite match, let alone surpass, that of its predecessor is disappointing, but shouldn't be too surprising. There is a lot going on in this movie. Sometimes it feels like they needed to cram in everything because they knew it was the last one that this team would make. The end result is a bit bloated and unbalanced, but still highly enjoyable. With a solid visual presentation, stunning audio presentation on Blu-ray, and a reasonably in-depth and satisfying amount of extras, The Dark Knight Rises is certainly a film you can proudly place on your shelf, alongside the other two film in this series.