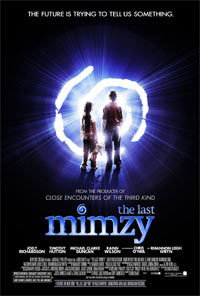 I never read "Mimsy Were the Borogoves", the 1943 short story by Henry Kuttner and Catherine Moore, so I had no real idea of what to expect when going into the feature film version loosely based on the story, The Last Mimzy. The premise is interesting at the core: a scientist from the distant future - where the human genome has been irreversibly altered and man is unable to survive without the aide of climate suits - sends back a "toybox" of gadgets, hoping that someone will be able to figure out the message encoded within, and send back the necessary DNA sample. The "toybox" is found in modern-day Washington State by young Noah and Emma Wilder, and as they play with the "gadgets" inside, they become smarter at a frighteningly fast rate.

Their parents (Joely Richardson and Timothy Hutton) are unsure of what is going on, but Noah\'s science teacher (Rainn Wilson) thinks it might have something to do with ancient Tibetan prophecies. Or something like that. What is the secret of the Last Mimzy? What will happen to the kids? When the government finds out, will it end with a shameless knock-off of E.T.?

No, it doesn\'t knock off anything like E.T., but it certainly strives for that vibe, where the kids know more than the adults, and there\'s a payoff, of sorts, at the end. The movie was much better than I had expected - but I wasn\'t expecting much, so don\'t take that as a glowing endorsement. I didn\'t really feel caught up with the characters most of the time, and the adults were so slow and unreactive half the time that I wondered if they were even aware of half of the stuff that was going on - in the scenes that they were in!

But the biggest problem, for obvious reasons, is the directing. Bob Shay directed this movie. If that name sounds familiar, it should - Robert Shay is the head of New Line Cinema. Hmm. Can you imagine working on a movie, and you need to tell the director that there\'s a problem with the storyline, or something doesn\'t make sense - and he happens to be the super-boss as well? I think there were too many "yes men" on this film, and no one wanted to point out the flaws.

The music, by Lord of the Rings composer Howard Shore works much better in the film than it does on CD. In the movie, it provides the appropriate emotional undercurrent for all the scenes it shows up in, and has some recognizable thematic material as well. On CD, it\'s musical wallpaper that puts you to sleep. Oh well.

Should you go see The Last Mimzy? Eh, if you have nothing better to do, but I bet that you do.