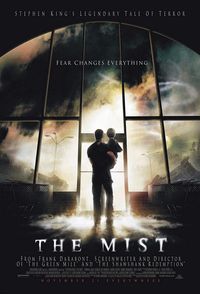 Frank Darabont has had some success with the works of Stephen King. The Shawshank Redemption and The Green Mile were critically acclained, but those were dramatic stories. Stephen King\'s The Mist has plenty of drama as well, but it\'s definitely a horror film. An R-rated, gory, bloody, horror film with creatures. After a fierce storm rushes through the small town of Bridgton, Maine, trees are down, and there is much to clean up. David Drayton (Thomas Jane) is an artist who does movie posters, and he takes his son and neighbor (with whom he has had a dispute in the past) with him to the supermarket to get food and supplies. A strange thick mist starts to envelope the town, and soon Dan Miller (Jeffrey DeMunn) bursts into the store, bleeding, saying that something is in the mist. No one is sure what to do - but Mrs. Carmody (Marcia Gay Harden) believes that this is the onset of the Apocalypse. When Drayton (searching for a blanket for his son) hears something banging against the loading dock, he tries to convince some people that something is out there. But it will take many deaths to convince people, and soon the battle between creatures and humans will take a back-seat to the battle raging within the store between the people who think they should try to escape, and those led by Mrs. Carmody who believe that it\'s God\'s will and the rapture is upon everyone. It\'s an exploration of how primitive humans get under pressure, wrapped in a horror film candy shell.

While The Mist has a conflict between two divided peoples within the storyline, it apparently has divided people as to their thoughts of the film itself. Some people I know didn\'t like the film at all, because they didn\'t think that people would ever act in the manner portrayed in the film, when in a disaster situation. Also, the portrayal of Mrs. Carmody as a fervently religious wacko who manages to get a slew of followers might seem a bit over-the-top. But there are those (such as myself) who enjoyed the conflict between humans and creatures, as well as the two groups of humans. The film is genuinely frightening at many times - the way it\'s shot is effective in conveying the fear of the market patrons, and it also has some great creature design.

Music is virtually non-existent, with composer Mark Isham\'s electronic score only poking through on occasion, letting the silence play out the fear. Towards the end of the film, \"The Host of Seraphim\" by Dead Can Dance is used to great effect - the first time. By the time we hear it for the 4th and 5th times, it starts to get a bit repetitive and heavy-handed. Overall, the film is enjoyable and scary, but some of the character motivations seem a bit over the top and simplistic, particularly that of Mrs. Carmody, who had the audience actually yelling at the screen. But Darabont is an excellent filmmaker, and his talent rises above the flaws of the film.