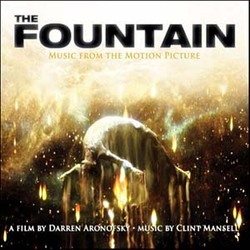 Before I begin this review, I need to provide a bit of context. I loved The Fountain. I will need to see it many more times before I actually understand it, but it was one of the most beautiful films I have ever seen. Due to its slow nature, Clint Mansell's score is probably one of the most necessary scores in film these days, as he added the needed sense of motion that the imagery and plot lacked. The one thing I just feel I have to point out, however, (and I am allowed since one of the album track titles uses the name) is that Xibalba was the Maya underworld, which was seen as watery and accessible through caves. Therefore, while the idea and the imagery of the dying star resembling heaven was great, using it to represent the Maya underworld was a bit of a stretch. Finally, this is the third Clint Mansell album I have reviewed, and the three scores could not be more different. In fact, if I didn't know better, I would not say it was the same composer. Sahara's jazzy, Bond-styled action and Doom's techno/rock are nothing like The Fountain, and Mansell's ability to adapt his style to the film is quite impressive.

There are two main motifs for The Fountain, the first is a simple 5 note progression, which is performed following the downbeat in the measure. A secondary three-note motif is also used throughout and has similarities to part of John Powell's Phoenix Theme from X-Men: The Last Stand. These motifs are performed in various forms and at times blended together in a running string line that becomes the full theme. The album opens and closes with quiet piano cues, the latter of which plays over the end titles. In "The Last Man," the motifs are hinted at in slow string statements, but do not come in fully until "Tree of Life," which is built up to in the preceding cue. "Tree of Life" starts out with heavy drums and an electric cello performing the three-note motif. This heavier tone of this cue, which returns in force in the finale "Death is the Road to Awe," is, tonally, very similar to some of the harsh electronic parts of Hans Zimmer's Black Hawk Down.

As I mentioned before, Mansell keeps the music moving, even at times where percussion is absent, with some form of pulsing string line, the way a number of scores have done recently, such as The Island and King Arthur. This can be heard in "Death Is A Disease" and the pulse stands alone at times and is joined by a solo cello at others. This movement is not always present. "Xibalba" is a slower cue that actually has a faint hint of a choir at the end. "Death Is the Road to Awe" is without a doubt the highlight of the album, with a broad spectrum that encompasses everything Mansell did for the film. It opens with a soft tremoring moving line and a faint statement of the full theme following the five note motif. The piano takes over with bold offbeats and the three note motif, with a drawn out final note. The theme comes in and out, replaced by the motifs as the volume gradually builds, adding chimes and more instruments as well as the electric guitar sounds. Toward the end, percussion is added as well. With two minutes remaining, the music stops. Then the electric guitars and cello come back with bold strings playing snippets of the theme in a slightly faster tempo and both motifs coming in the background. Then it stops again before the choir finally comes in after being hinted at only once. The three note motif plays under it and more pulsing strings and chimes bring the cue to a close. I can already hear this cue being played in trailers.

The score is performed beautifully by The Kronos Quartet and the rock band Mogwai, who had songs featured on last year's The Constant Gardener soundtrack. A number of the cues, I believe, were used more than once during the film, but for the sake of avoiding too much repetition, the album was cut down to a manageable length. Mansell's score appears simple, with a limited variety of instruments and what appear to be simple themes, but this score is in fact a very delicately layered piece that works almost as well as a classical work as it does a film score. One interesting result of this score is that it shows how well electronic elements can work with an orchestral score to enhance it rather than take away from it. I definitely think this score should be up for consideration come Oscar time.