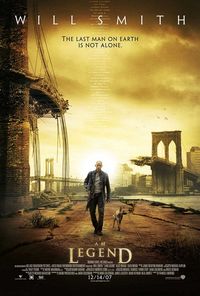 Review: I Am Legend

It\'s always pleasant when you leave a movie feeling as though it exceeded your expectations. I will admit that my expectations for I Am Legend weren\'t very high. The latest attempt at adapting Richard Matheson\'s now-classic tale of the last man on earth stars Will Smith as Dr. Robert Neville, a military scientist who seems to be the only human left after a virus has killed off most of the people on the planet, and made the rest into violent rabid-like creatures who have an aversion to daylight and a desire for human blood. Searching for a cure, he is alone in New York City, with his faithful dog Sam, and still holds out dwindling hope that there are other survivors like himself.

The film differs from the book in many areas (primarily in the aspect of the relationship between Neville and the creatures he\'s trying to cure), and the last half of the film has an almost completely different plot. Directed by Francis Lawrence (Constantine) the film does a great job showing the isolation and solitary existence that Neville\'s life has become. Lengthy shots that follow him through the barren and weed-covered streets of New York City are evocative and very well done. In fact, most of the highlights of the film involve the contrast of the post-outbreak empty New York City with Neville\'s flashbacks to when Manhattan was declared a quarantine, and the frenetic evacuation sequence reminds me a lot of Spielberg\'s War of the Worlds - but that\'s a good thing.

There are lots of great creepy moments, and the use of shadow and light is great - especially in a sequence when Sam runs into a dark building. Where the film strays, though, is in making the nocturnal creatures completely CGI - they feel artificial, and it just doesn\'t work as a convincing effect, especially with the \"leader\" of the creatures, who seems more like the wide-mouthed mummy in The Mummy than a scary vampiristic creature. James Newton Howard\'s score is minimalist and subdued, with tender piano passages underscoring much of the emotional beats, and some high octane percussion during a few action sequences. But there is a lot of silence in the film - which goes a long way in selling Neville\'s isolation in the former city that \"never sleeps\", and it\'s the mood that is created that makes I Am Legend an effective thriller.