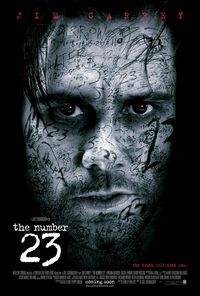 As funny as Jim Carrey typically is, I find his dramatic roles interesting and compelling. Eternal Sunshine of the Spotless Mind and The Truman Show were really well done, and it appears that Carrey is taking a stab at the psychological thriller with The Number 23. Walter Sparrow (Carrey) is an animal control officer, and his wife Agatha (Virginia Madsen) runs a bakery. Walter runs late one day in picking up Agatha, so she moseys into a used bookshop where she finds a homepressed novel: The Number 23, written by a \'Topsey Kretis\'. As Walter reads the novel (a pulp noir detective murder mystery), he starts to see similarities between the protagonist Fingerling, and his own life. In the novel, Detective Fingerling stumbles across an obsession with the Number 23, and soon it starts to consume him. But it also starts to consume Walter, and as the parallels between his life and the book start to converge, he fears that the obsession of the number will consume him - and drive him to murder.

This psychological thriller was alright. There were some very well done moments, and some other parts that just didn\'t hold up. The series of revelations towards the end of the film were half-predictable, but it was still entertaining nonetheless. Director Joel Schumaker is blessedly not in his Batman and Robin phase, but rather in a Flatliners mode. There\'s some cool imagery, and the \"in-the-book\" sequences were nicely stylized. The music by Harry Gregson-Williams works well in the film, providing a twisting noirish element to the storyline, but doesn\'t hold up as well on its own on CD. I\'d give the film 2.3 stars.