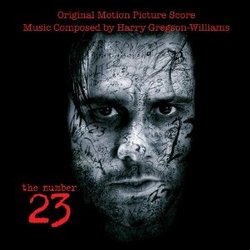 Harry Gregson-Williams has scored two films for director Joel Schumacher prior to their latest collaboration, The Number 23. These first two scores, Phone Booth and Veronica Guerin, could not have been more different - one was comprised entirely of electronic beats and sounds to reflect New York City, the other was a beautiful, Irish-flavored score. The score for The Number 23 actually falls somewhere in between, and mixes elements from both. The "Opening Titles" sets the feeling of the entire score, and contain the two dominant tones Gregson-Williams aimed for with his music. It\'s a very interesting, layered cue that is comprised of electric cello and electric violin (performed by Martin Tillman and Hugh Marsh) and a string orchestra, all underlain by pulsing electronics with a trumpet processed to sound saxophone-like. The second half of the cue contains the more melodic and romantic aspects of the music, with light piano and strings, and less harsh chords from the electric violin. The Number 23 uses the electronics from Phone Booth that are common in Gregson-Williams\' thriller scores, but also contains the electric strings and orchestral moments from Veronica Guerin.

The Number 23 is not much different from his recent score to Deja Vu in its elements, but they are utilized in a different way. This score is less thematic and uses the electronics as the primary rhythmic tool rather than the moving string lines that were one of the thematic elements in Deja Vu. That having been said, there are a few moments where the strings do pick up a moving line, for example at the beginning of "Finishing the Book", in a similar fashion to Batman Begins. This cue also contains the first presence of traditional brass in the score, which come in over the moving line with a series of chords for color. Other tones for added color also permeate the score, including the quiet trumpet-as-saxophone, and pulses from Tillman\'s electric cello. Unfortunately, a large portion of the score is largely moving underscore and there is little in terms of a theme, though there are recurring bits, such as an arpeggiated string phrase.

The final two tracks on the album begin to pick up the orchestral presence, with an impressive finale cue in "Atonement".  It\'s a very melodic cue with the strings, backed by an alternate horn line moves the score from a thriller score to a dramatic one. Later in the cue, woodwinds come in with the horn to bring the album to a quiet and almost uplifting conclusion. The album is arranged in the tradition of a Hans Zimmer score, with a small number of lengthy tracks, the longest nearing the ten minute mark. This makes for a good listening experience, but also makes finding particular moments of cues more of a challenge. Fans of Gregson-Williams\' other thriller scores will enjoy this album for its layering of different musical sounds, but for those who like his more melodic work should probably wait for Shrek the Third.