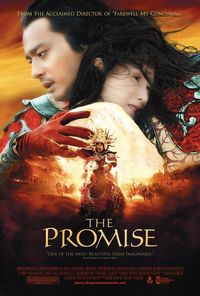 The Film: In 2005\'s The Promise, director/writer Kaige Chen (Farewell My Concubine) joins forces with Crouching Tiger, Hidden Dragon\'s cinematographer Peter Pau to tell the story of a love triangle between the slave Kunlun (Jang Dong Gun), Princess Qingcheng (Cecilia Cheung), and General Guangming (Hiroyuki Sanada), as they all try to defeat Duke Wuhuan (Nicholas Tse), who is trying to conquer ancient China. As far as the story goes, it\'s more fantasy than reality, with Qingcheng (as a child) making a promise to the Goddess Manshen (Hong Chen) that she will achieve greatness - but will be unable to have lasting love. When Kunlun - impersonating Guangming who was injured - rescues Qingcheng, she falls in love with Gunagming. Hilarity does not ensue, as it\'s hardly your usual mistaken-identity romantic comedy, but the film has some tongue-in-cheek moments to keep it from becoming too dour. As the conflict with Wuhuan comes to a head, will Qingcheng realize that she\'s fallen in love with the wrong man?

Composer Klaus Badelt has written an excellent score for the film, imbuing the characters with the depth and emotion that is sometimes missing from the screenplay. It\'s ethnic and melodic, and stands out nicely in the sound mix.

The Promise is an entertaining film, and nicely shot, but it\'s sadly dragged down by the incredibly disappointing visual effects. It\'s a flawed but film to be sure, though the release presented here on DVD is the edited American cut of the film, and not the lengthier overseas cut. It\'s best enjoyed with your brain checked at the door, so you can enjoy the imagery (save the visual effects), the fantasy-tinged storyline, and the music.

The Video: The film has received a solid transfer, and is presented in 2.36:1 anamorphic widescreen, although some grain pokes through now and then. The visual effect shots look the worst, however.

The Audio: There are two audio tracks presented: Chinese Mandarin Dolby Digital 5.1, and dubbed English Dolby Digital 5.1. It\'s mixed rather well, although at times you would expect (especially during the stampede sequence early in the film) to have your subwoofer rumbling much more than it does. The music is crisp and nicely presented, letting Badelt\'s music fill the soundspace during some of the more emotional moments.

The Extras: Nearly 30-minutes of deleted scenes are presented in non-anamorphic video. Some of these are extended versions of scenes in the film, and almost all of them seem to include some further character depth that was actually missing from this cut of the film. Why they didn\'t include them back into the film (or allow a seamless-branching option) is beyond me. The only other extra, aside from the film\'s trailer, is a 40-minute "behind the scenes" featurette. This is more of a B-roll compilation than an actual "making-of" documentary, and it\'s all in Chinese, with English subtitles. They don\'t really go into much depth on the filmmaking process, but it\'s interesting to see how a Chinese production works, and compare it to other DVDs where we\'ve seen how Hollywood productions go about their business. Sadly, there is nothing about Badelt\'s music, which was recorded in China with the China National Symphony Orchestra.

This single-disc release is a decent presentation of the US cut of The Promise. It would have been nice to see the full cut as presented overseas, and the visual effects and extras aren\'t as fleshed out as they could (and should) have been. Badelt\'s score is great, and even though the film doesn\'t live up to the expectations the music sets, it\'s nice to see what he had written, and for that alone, it\'s certainly worth a rental.