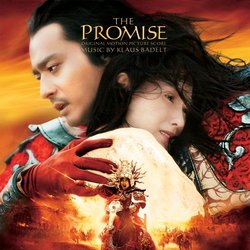 As an ethnically-themed action/adventure score by Klaus Badelt, The Promise is bound to be compared to his previous effort for The Time Machine, and while it is very good, it is lacking the superb thematic variety and development that made The Time Machine great. This is a very good score, which does borrow from other recent Asian scores, such as Crouching Tiger, Hidden Dragon and The House of Flying Daggers, but also provides a powerful and majestic feel to the film. This is done with a strong brass presence, which is a standard for a Badelt score, but not as common in Asian scores. That having been said, it is very different from Hans Zimmer\'s The Last Samurai. The Promise is a slower score, somewhat along the lines of Badelt\'s Ned Kelly, without the moving percussion or string lines from Zimmer\'s score.

The powerful brass - primarily French horns - may be in part to the orchestrations by Robert Elhai, who commonly works with Elliot Goldenthal and Brian Tyler. This brass tone, however, has the most in common with his work on Edward Shearmur\'s Reign of Fire, and in some cases actually sounds like a variation on that theme. Other parts of the score take on the feel of James Horner\'s more recent action work, namely Troy, during some of the faster-paced cues toward the end of the score. Most notable, however, are some Jerry Goldsmith sounds, especially the first minute of the final cue, "Wuhuan\'s Plan" that is reminiscent of The 13th Warrior.

The album is long, coming in at over 70 minutes, but it does not feel like too much. Badelt\'s main theme is used liberally and to good effect. The first cue, "Freedom of the Wa" is one of the best on the album and a unique sound. Female vocals, like those used in The Time Machine, open the cue and are quickly backed by restrained percussion and brass chords. The two Asian instruments that Badelt utilizes are the koto and fue. The best use of the latter is in "Snow Country" where it provides a cold feel to the music. After the opening cue, the percussion remains at a minimum until the 8-minute long "The Robe" where it returns in force. The other two action highlights are "Princess Kite" and "Stampede", both of which make full use of the theme in various forms.

Fans of Tan Dun\'s work may be surprised by this score, and critics of Badelt\'s often pure synth approach will be impressed. While I find that The Time Machine is a better album because it has a greater range of music, The Promise is probably Badelt\'s best score since. Fans of epic orchestral scores should check this out.