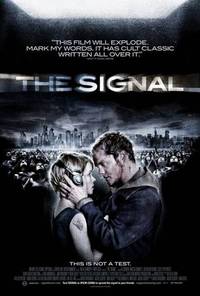 Awful... but at least the dried blood makeup was good.

But, hey, maybe it\'s me, maybe I\'m not into the modern psycho-horror genre, but I still have a hard time rectifying the other critics opinions of this film with my own. This is probably your typical example of low-budget DV-mastered horror that has permeated the screens of your local metro-plex ever since The Blair Witch Project. For that, it hits its mark, but on all other accounts it fails miserably.

The story itself centers around the relationship of three characters (two guys a gal, and a pizza... oh, wait) in the city of Terminus (which in this film is played by Atlanta, Georgia on any weekend of the year) which has just recently become the recipient of an electronic transmission that turns everybody who\'s seen or heard it into stark raving lunatic homicidal killers. Pretty simple premise to get this film rolling, however the underlying bit regarding the relationship of these characters (a marriage and a tryst) is what supposedly is supposed to be examined deeper with the slayings going on the in the background to add a little audience appeal. Neither of these appealed to me.

The cardboard acting, the constant camera cuts and pans, the shitty DV lightning and camera effects, as well as supposedly a preponderance of a script, well, pretty well ruined the film on it\'s own. The best I could come up with to describe how poorly the film was stitched together (three directors helmed different sections of the film), was that it was actually \"un-directed\". The attempts at dry humor are pushed too hard (Transmission 2), or the psychology of the story becomes to abstract and muddled (Transmission 3). I never ended up caring about the characters, the story was too disjoint, even though it was roughly outlined, it seems, to go from infection to resolution, I was just shaking my head at the end wondering why I stayed in the theater (I counted at least seven walkouts in a theater that had, at most, twenty members).

The directors have had some minimal success before, with the Last Goodbye (not to be confused with any other quality movies with \"Last\" or \"Goodbye\" in their title) in 2004, but for each, this is only their third film. Supposedly, this had been picked up at last year\'s Sundance Film Festival after a midnight showing, and was quickly offered a distribution deal. I\'m not sure if this was out of desperation for Magnolia Films, but they picked up a \"family\" horror film, with many of the directors and producers friends and family taking part in it\'s production, but the \"film on a dime\" feeling permeates it too much, to the detriment of the film as a whole. This also included a bare-bones moody soundtrack (one of the high points on the film) by Ben Lovett in his sophomore outing as film composer. While not the greatest score emotionally, it\'s electronic drones and repetitiveness emphasized the power of the poisonous signal to the residents of Terminus.

If I could say anything to anybody regarding this film, stay away from anybody asking you to pay full price for admission. I think this was a desperation purchase and filler for a release schedule by a studio. I know new directors with any idea need to be encouraged and fostered along, but this was far from art and \"popcorn flicks\" as anybody could get. It\'s neither scary nor engaging, funny nor poignant, but rather an exercise in low budget \"make it on a weekend\" waste of videotape. I would hope everybody involved would try better next time and stick to mastering a few conventional techniques rather than reaching for the conceptual \"brass ring\".