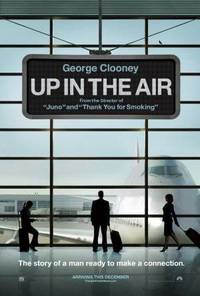 Up in the Air

Review: Up in the Air

Based on the 2001 novel of the same name, Up in the Air is a dour dramatic comedy about Ryan Bingham (George Clooney), who spends his time travelling around the country as a corporate downsizer, laying people off when their bosses are too cowardly to do it themselves.  When the company office in Omaha, Nebraska decides to entertain a new plan by young co-worker Natalie Keener (Anna Kendrick), to cut costs by doing the layoffs over the internet,  Bingham realizes that his own job might be in jeopardy.  In an attempt to show how dehumanizing the job is, and how important it is to give the 'personal touch', Ryan has Natalie tag along with him on a few jobs.    As they travel around the country, Ryan's philosophy - as well as his rather isolated life and inability to make any meaningful relationships - start to bubble to the surface, especially in his attempt at a casual romance with fellow business traveler Alex (Vera Farmiga).  Soon Natalie is experiencing the best and worst of the job, and Ryan is trying to make some meaning out of his life as he strives to achieve the coveted 10,000,000 frequent flier miles mark.

Up in the Air is a bit of a downer of a film, coming at the height of an economic downturn where layoffs are, sadly, all too common. In fact, many of the people shown being interviewed on the camera about their layoffs are real people, not actors, who were recently let go.  George Clooney does a great job in the role, and one of the best sequences involve his description of method of efficiently getting through security at the airport.  As this is a predominantly character-based film, the screenplay is vitally important, and director Jason Reitman (along with co-writer Sheldon Turner) turned in a very solid script.  Clooney - as well as Farmiga and Kendrick - do it justice, and overall it's one of those movies that flows exceptionally well.

It's not all depressing stuff, though.  There is quite a bit of humor to be found in the film, even though it's not laugh-out-loud material.  At times we can relate to the awkward situations that Ryan finds himself in, and the comedy comes from that.  Helping push the humor and emotion along is the effective and subtle musical score by Rolfe Kent, with its predominant usage of pizzicato strings and whimsical woodwinds. Even though it's a bit of a bittersweet film, with a somewhat bleak philosophy, Up in the Air is a well crafted, excellently written and superbly acted film that is absolutely worth seeing. I just don't know if it's the type of film I'll see more than once.