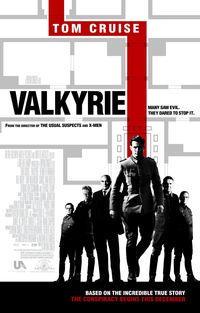 On July 20, 1944, a plot to assassinate Adolf Hitler failed.  Planned by members of his own party who comprised of the German Resistance - including some high-ranking officials - the failed coup attempt was led by Colonel Count Claus von Stauffenberg.  After being wounded in North Africa, where he lost an eye, his right hand and two of the fingers on his left hand, Stauffenberg became increasingly disillusioned with the way Hitler was acting, and believed that he should be removed from power.  The story of the conspiracy and attempt to assassinate Hitler was told in the 2008 film Valkyrie, directed by Bryan Singer and starring Tom Cruise in the Sauffenberg role.

While there had been much controversy surrounding the film, the casting of Cruise as a Nazi, and other production troubles, Valkyrie ends up being a rather interesting and at times tense thriller.  Surrounded with excellent actors like Kenneth Branagh, Bill Nighy, Terence Stamp, and Tom Wilkinson, the film manages to succeed at the difficult task of letting the audience care about a plot that we already know failed.  Combining the dialogue-heavy writing of screenwriters Christopher McQuarrie and Nathan Alexander with the editing chops of John Ottman, we have a film about a failed conspiracy that works to the point where you actually might think they have a shot at succeeding in assassinating Hitler!  It might not be the type of film to watch over-and-over like The Usual Suspects, but Valkyrie was a decent and interesting film about one of the many plots to kill Hitler.

Released on DVD and Blu-ray, Valkyrie sports a very solid and natural film transfer.  Colors appear naturalistic and contrast is solid, and there are some varying levels of film grain.  Some scenes look a bit grainier than others, but overall this is a very good image.  Audio is presented in English 5.1 DTS-HD Master Audio, Spanish 5.1 Dolby Digital, and French 5.1 Dolby Digital.  For a dialogue-heavy film, the DTS-HD track is surprisingly immersive particularly during the few action sequences in the film.  Tension is ratcheted up with John Ottman\'s score, and in all it is a very naturalistic sound experience.

The Blu-ray has a pretty impressive amount of extras.  First up are two commentary tracks. The first features director Bryan Singer, actor Tom Cruise and co-writer Christopher McQuarrie.  The second is McQuarrie with the other writer, Nathan Alexander.  Both tracks are interesting, and provide a wealth of detail on the history of the events, the production, and the challenges faced with making it, but the first track is the more engaging of the two, with a lot of information flowing at a steady pace. The second commentary focuses more on the story of the historical events, as the two writers talk about how the thriller was written, and while there is a bit of repetitive information carried over from the first track, it\'s still an interesting listen.

Once you get through the commentaries, we have a somewhat anemic selection of pretty standard making-of featurettes.  Starting with "The Road to Valkyrie" (HD, 16-min), which takes a short look at the film from script to production, and features interviews with the key filmmakers and actors talk about their experiences on the film, it unfortunately lacks any hindsight on the troubled production.  "The Road to the Resistance: A Visual Guide" (HD, 9-min) is a short look at the real Colonel Stauffenberg, with visits to the real locations where events transpired, hosted by the Colonel\'s grandson who is still alive.  "The African Front Sequence" (HD, 7-min) looks at the opening action sequence in the film, and "Taking to the Air" (HD, 7.5-min) explores the use of vintage aircraft in the film.  "Recreating Berlin" (HD, 7-min) looks at the location scouting that took place to make the film look as authentic as possible.

"92nd Street Y: Reel Pieces with Tom Cruise and Bryan Singer" (SD, 39-min) is a Q&A session that took place in New York City with Tom Cruise and Bryan Singer. It\'s interesting, but drags on a little bit.  Finally, a rather surprising feature-length documentary, "The Valkyrie Legacy" (HD, 114-min) is included.  Directed by documentarian Kevin Burns, this fascinating in-depth piece looks at the true story of the events portrayed in Valkyrie, and features archival footage, interviews, and much more.

Valkyrie is a surprisingly enjoyable film that sports a solid film transfer, solid audio mix, and decent extras that are boosted by the engaging audio commentaries and feature-length documentary.  You might want to consider renting it first, but this film certainly has a deserved place on my shelf.