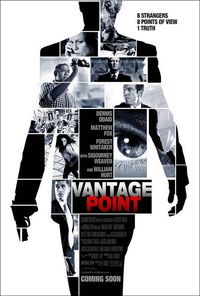 Just as he was about to address a global anti-terrorism summit in Salamanca, Spain, the President of the United States (William Hurt) was shot twice in the chest. What led up to those moments, and what happened immediately afterwards is the subject of Vantage Point, a new thriller that makes you question what you\'ve seen, even as you go back and re-see it over and over again through the eyes of different witnesses and participants.

We first see the events through the eyes of GNN News Producer Rex Brooks (Sigourney Weaver), who witnesses it from the multi-camera setup in the news van. Then we see it through Secret Service Agent Thomas Barnes (Dennis Quaid), who is back on detail with the President, coming back from time-off after a previous assassination attempt on the President, in which Barnes took the bullet. Then it\'s on to a tourist (Forest Whitaker), a local policeman, and then one of the participants in the assassination attempt. Each time we see the event through their eyes, more information is revealed about the conspiracy, and we go a little further into the storyline. There are a few twists and turns throughout and I won\'t reveal them here, but what starts out as a fairly intriguing concept slowly turns into yet another standard political action thriller.

It\'s not that it\'s not a very interesting and at times exciting film - it certainly is those things. It\'s just that the \"rewind\" effect to bring us back to the clock striking noon starts to take on a bit of a Groundhog Day vibe. By the fifth time, it almost becomes a recurring gag. There are some nicely staged action sequences, the highlights being a car chase involving Barnes and a suspect, and a commando style attack on a hotel suite. This is the first feature film directed by Pete Travis, and he certainly does a competent job, given the complexity of the back-and-forth nature of the film. Keeping everything straight is veteran editor Stuart Baird, and composer Atli Orvarsson\'s score is full of percussive energy and some nice thematic moments to keep everything gelled together.

Call it The Bourne Memento, if you want. It\'s a somewhat gimmicky film that plays enjoyable enough, but the by-the-books ending, combined with a few subtle political jabs and a near constant distrust of government makes this a film that\'s worth a rental, but not something to necessarily rush out and see. But, like the Bourne films, if you do go see it in a theater, sit near the back - it suffers from occasional shaky-cam syndrome.