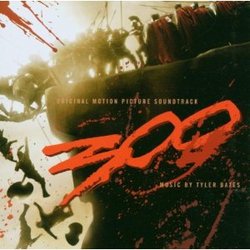 Composer Tyler Bates chose a harsh electronic tone, fused with orchestra and epic choir for the film adaptation of Frank Miller's graphic novel, 300. This seems like a strange choice, but one has to remember that this film is not trying to be a historical representation of the Spartan's battle at Thermopylae. Bates' score uses tones heard in Hans Zimmer's Black Hawk Down and elements of Bear McCreary's scores for "Battlestar Galactica". This past year, a few scores utilized this orchestra/electric fusion for films that this approach may not have been expected. I am not referring to the use of synth sample libraries, or even electronic beats and sound effects. Instead, I am referring to the use of electric string instruments - in the case of Pirates of the Caribbean: Dead Man's Chest, a good example, Zimmer ran the orchestra recording through a guitar amp to a similar effect. Zimmer and Harry Gregson-Williams often use Martin Tillman or Hugh Marsh as soloists on electric cello and violin. The second major film score to use this new tone was Clint Mansell's The Fountain featuring the Kronos Quartet. The harsh electronic sound of the score made it very unique in a way appropriate to the film. Bates' 300 is the same.

Bates, as well as the film, has been getting some prominent publicity, and for good reason: Warner Brothers Records is releasing the soundtrack and not tacking on any pop songs, leaving the hour-long album full of score. They're even releasing a "special edition," which include a commemorative booklet and trading cards. Bates has stated that his combination of musical ideas was careful and intentional to create a harsh, powerful sound to represent the strength of the Spartans. Percussion really stands as the foundation for this in a large amount of the score. Electric guitars are also used heavily as rhythmic elements, such as in the opening cue, "To Victory." The album opens slowly, with the main elements taking a few cues to be introduced. "Returns a King" brings in the first appearance of the powerful choral pieces Bates wrote for the film, though fans will note similarities to Elliot Goldenthal's Titus score. The choir cues are impressive, sung in a phonetic language and epic on scale.

Iranian vocalist Azam Ali (The Nativity Story) provides the counterpart to the large choral pieces with her clear voice. Azam is not used for any one particular character or setting, but for many. In "Cursed by Beauty", she is backed by light percussion, while in "Goodbye My Love" by the strings and horns. Other performances are more ethereal and Bates used her voice as a sound color, as in "No Sleep Tonight." Additionally, her solos are used to represent both the Spartans and the Persians. While the score's strength is in its variety and use of a wide array of sounds to bring out the epic scale of the film, its weakness is the same. The lack of any melodic themes or differentiation between the two armies or two kings with varying instrumentation makes the score cues begin to run together, especially with the album consisting of a large number of short cues, most between 2 and 3 minutes in length.

That having been said, the score sounds great. The orchestra and choir was recorded at Abbey Road, and Bates' production of the score with heavy electronic elements still enables both to sound very good and also be heard clearly. This is especially vital as the action begins to build toward the second half of the score with the dark choral cue, "Tree of the Dead," which leads into the percussive "The Hot Gates." This choral cue is backed by Azam and ethnic instruments to lead into heavier electric guitar, borderline rock cue, toward the end. "Fever Dream" is a harsh cue with pulsing guitar rhythms with solo guitaviol, an electric bow instruments that Bates employed for the darker tones of the score. This cue leads into "Xerxes Tent," a percussive, ethnic cue with Azam's vocals and the guitaviol playing over the rhythms.

"Tonight We Dine in Hell" and "The Council Chamber" both contain a sweeping orchestral tone and Azam's vocals, both supported by a horn melody. Together, they create a "calm before storm" that runs into the finale action beginning in "Xerxes Final Offer." "The Council Chamber" opens with an interesting set of chord progressions that are very similar to parts of Hans Zimmer's Gladiator. "Glory" begins the conclusion, and "Message for the Queen" furthers this, opening with quiet woodwind solos, then Azam comes in with the orchestra later. The final track, "Remember Us" finally brings to bear the full power of the orchestra and chorus for the heroic 300 Spartan warriors. The cue begins quietly and then slowly builds into a beautiful piece with layered brass underscored by the chorus; a truly uplifting cue and appropriate for the heroes of Thermopylae.

300 is among Tyler Bates' best work. The impressive scale of the score, incorporating large orchestra and choir with soloists and electric elements, blends together well to create a modern, yet ethnic sound, well-suited for the heroes in the film. Some critics of modern scoring will lament the use of heavy electric instruments, but as I stated before, this film was never meant to be a historic take on the battle. The heavy use of CGI that helped bring the stylized graphic novel to life are accentuated by the harsh, yet powerful tones of the score. Bates' 300 is like what Brian Tyler wanted his score for Constantine to be, had it not been toned down by the studio. I do wish there were distinct themes for the opposing sides in the film, but Bates is to be commended for his fusion of musical ideas and epic scale of this project.