'The Walking Dead' Soundtrack to Be Released 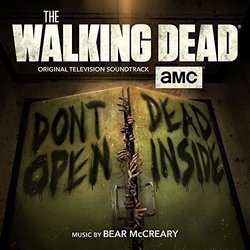 Lakeshore Records and Sparks & Shadows are proud to release the first soundtrack featuring Emmy Award-winning composer Bear McCreary's (10 Cloverfield Lane, Rebel in the Rye) original score for AMC's The Walking Dead. The soundtrack will be released digitally and CD on October 20th and on LP October 27, 2017.

For this long-awaited release, McCreary selected both his personal favorites from the first seven seasons, along with those most frequently requested by fans. He said, "narrowing down the highlights from seven years of work was a tremendous challenge."

Premiering on Halloween 2010, in 120 countries simultaneously, The Walking Dead became a cultural zeitgeist practically overnight. A deserted car wreck. A policeman walking through it. The back of a little girl. He calls to her. At first she doesn't respond. Then she turns around… revealing that all is not quite what it seems. The cop left with no choice shoots her, and as she falls, the tremolo string arpeggios of the "Main Title Theme" by McCreary crescendo, drawing millions of viewers into this harrowing world of The Walking Dead.

"When we started discussing the first season we agreed that drama, action, and horror would be felt more intimately if the score were used only in pivotal scenes, and that it should be written with tonal clarity," McCreary explained of his initial approach to scoring The Walking Dead. During the zombie apocalypse, silence would be the most prevalent – the lack of sound is what survivors would notice. Those moments when McCreary's music kicks in, viewers know they are about to be treated to something important. "This approach allowed me to create big emotional impacts with sparse musical gestures."

As the series progressed, McCreary was able to expand the musical palette. For the second and third seasons he did so with "acoustic guitars and drums to connect with the farmhouse setting (check out 'Message to Morgan')." He blended these with a small orchestra for the gut-crushing mid-season finale ('Sophia'). As audiences were introduced to new characters like the Governor, McCreary incorporated a synth pulse to his largely organic instrumentation. When Neegan was introduced a few seasons later, he employed "creepy electric guitar gestures."