Sony Classical to Release 'All the Money in the World' Soundtrack 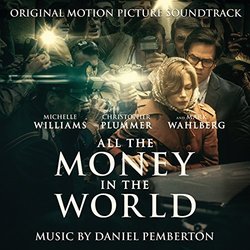 Sony Classical proudly announces the release of All the Money in the World (Original Motion Picture Soundtrack), featuring music by multiple Golden Globe nominee Daniel Pemberton. The soundtrack to the new film by Ridley Scott will be available digitally on December 22 and on CD January 12. The film will be released in the U.S. on December 25, 2017.

Daniel Pemberton says about the soundtrack: "Working with the legend that is Ridley Scott is always an absolute delight. He gives you the space to try something different and loves to be surprised - he doesn't want the obvious approach. There are not many movies where you can write operatic choral pieces, brand new classical work and modern post-rock all in the same world but within this film we could. You've got be able to keep up with him though and he moves FAST! - I think I just about managed on this soundtrack, and couldn't be happier with the result."