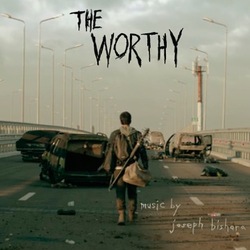 The post-apocalyptic thriller The Worthy was one of the largest Arabic genre film productions in the Middle East, served by an evocative score combining electronic elements with organic grit and a percussive push. The devastation on display is also reflected in emotionally wrenching string writing, channeling loss and hope along with the sense of doom in this dark vision of one possible future.

"Going into this it was clear that Ali (Mostafa, director) didn't want a necessarily Middle Eastern sound though the film is of the region," said Bishara. "He described it as taking place in a world after extremism, a relatable and possibly devastating scenario."
For a movie that offers a dark future, composer Joseph Bishara seemed a perfect choice. Bishara is composer and music producer who tends towards a darker flavor; the highest grossing horror composer of the last decade with films surpassing the billion-dollar box office mark.

"Thematically the film deals with personalities that emerge through orchestrated chaos, and how various types handle danger and adversity," Bishara explained. "There is a clear path for the hero to rise out of the situation, and his musical journey was worked backwards starting with the final scene, then deconstructing into the earlier setup."