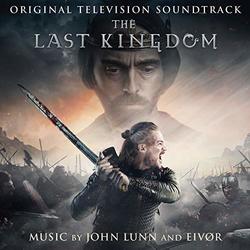 Sony Music today announces the November 9th release of The Last Kingdom (Original Television Soundtrack) with music by Emmy-winning composer John Lunn and vocals by Faroese recording artist Eivor. The third season of The Last Kingdom will premiere November 19 on Netflix. Produced by Carnival Films, the award winning producers of Downton Abbey, The Last Kingdom is based on The Saxon Stories by historical novelist Bernard Cornwell and adapted for television by award-winning screenwriter Stephen Butchard.

Uhtred, born the son of a Saxon nobleman, is captured by the invading Danes and raised as one of their own. Forced to choose between the country of his birth and the people of his upbringing, his loyalties are ever tested. What is he – Saxon or Dane? On a quest to reclaim his birthright, Uhtred must tread a dangerous path between both sides if he is to play his part in the birth of a new nation and, ultimately, recapture his ancestral lands.

John Lunn is the award winning composer of countless celebrated British TV dramas, including Downton Abbey, The White Queen and Shetland. After the worldwide success of Downton Abbey, John was eager to tackle something entirely different, and The Last Kingdom provided the perfect opportunity. Set in 9th century England, the show explores the battles and power struggles that waged between the Danes and Saxons; resulting in a conflict that would eventually shape England into what it is now. From the outset, the show's producers were keen to avoid an orchestral, Hollywood-esque score, and so they worked alongside John to develop a more experimental and dynamic approach to the music. Initially, the score involved an armory of analogue synths, sequences and heavily distorted double bass, and it worked well… but there was something missing, something unique that would become the very essence and signature of the series. John found it in the amazing vocal and songwriting talent of Eivřr.

Eivřr was born in the Faroe Islands. Her background and experience of performing across the Nordic and Scandinavian territories have shaped her unique and powerful musical talent. After John saw a video on YouTube of Eivřr performing her signature recording "Trřllabundin," which encompasses her incredible vocal range, throat singing and Nordic drum playing, he immediately realized how Eivřr could be the integral part of The Last Kingdom's sound. After an initial recording session in London, it became clear to the producers that what John and Eivřr were creating was perfect for the series. Working as a team, John and Eivřr have composed the score for all three seasons of the show so far, and their latest project harnesses the phenomenal sounds and mood of The Last Kingdom into one incredible album.

As John and Eivřr produced the music for each season of the show, they were both aware that the material being composed had much more to say, and could be taken to places beyond the TV screen. So, when Carnival Films proposed releasing the soundtrack, John and Eivřrdecided to create almost entirely new tracks. Fans of the show will no doubt recognize the main themes, but the album also contains material that has never before been heard in any of the three seasons.

"Working together again with this approach has been a wonderful and creative experience, and we feel that our understanding of each other as writers and artists has grown further," says John Lunn and Eivřr. "It's been a great honour and pleasure making this record, and we hope we've given you, the listener, something you can enjoy in its own right, while remaining true to the spirit of The Last Kingdom."