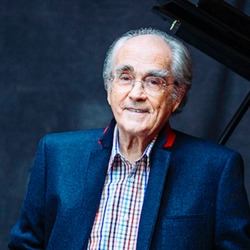 Michel Legrand, Academy Award-winning composer of Summer of '42, The Thomas Crown Affair and Yentl, passed away today at age 86 in Paris, France.

The composer's other credits include numerous films directed by Jacques Demy, including The Umbrellas of Cherbourg & The Young Girls of Rochefort, as well as Norman Jewison's Best Friends, Irvin Kershner's Never Say Never Again, Richard Lester's The Three Musketeers, John Sturges' Ice Station Zebra and Orson Welles' The Other Side of the Wind. Throughout his career, he received three Academy Awards, five Grammy Awards, one Golden Globe and BAFTA Award. Among his best known songs (for movies) are "The Windmills of Your Mind" from The Thomas Crown Affair, "Papa, Can You Hear Me?" & "The Way He Makes Me Feel" from Yentl and "What Are You Doing the Rest of Your Life?" from The Happy Ending.