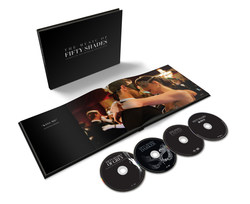 On February 14, UMe brings together the individually released soundtracks for one of the most successful film trilogies of all time as The Music Of Fifty Shades – Complete Soundtrack Collection. This deluxe 4CD, 76-track box set includes all three film soundtracks—2015's Fifty Shades Of Grey, 2017's Fifty Shades Darker, and 2018's Fifty Shades Freed—plus a bonus disc featuring the Fifty Shades Of Grey Remixed album and a previously unreleased version of Liam Payne & Rita Ora's international singles chart hit "For You (Fifty Shades Freed)," in addition to rare remixes and other bonus tracks. An exclusive, lavish hardcover collectible coffee-table photo book with images from all three movies is also part of the overall package.

Fifty Shades fans will now be able to enjoy such indelible songs as Annie Lennox's haunting cover of "I Put A Spell On You," The Weeknd's dramatic reading of "Earned It," ZAYN and Taylor Swift's smash-hit duet "I Don't Wanna Live Forever," and the uplifting Hailee Steinfeld & BloodPop singalong "Capital Letters," along with the remixes of key tracks by Laura Welsh ("Undiscovered") and Jessie Ware ("Meet Me In The Middle") and a number of selections from each movie's score by noted film composer Danny Elfman, all in one complete collection.

The Music Of Fifty Shades – Complete Soundtrack Collection is the perfect aural companion for fans of both the film trilogy and book series alike.