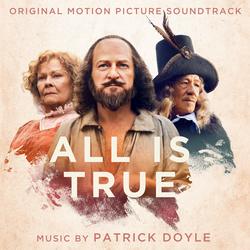 Of the soundtrack, composer Patrick Doyle says: "I have the great fortune of a long-standing working relationship with Kenneth Branagh, which has been a huge pleasure and very fruitful. Kenneth kindly asked me to score the picture, All Is True, and I readily agreed. I loved the script and, of course, with the knowledge that Ken and Judy would be playing William and Anne, I knew it would be electric and historic.

The schedule was very tight and I was sent the rushes every day, composing hot on the heels of the cut. This included two songs written to Shakespeare's words, which both feature in the screenplay: "Fear No More", from Cymbelne, and "I Know A Bank" from A Midsummer Night's Dream. These songs formed the foundation for the thematic development of the score. It is always a privilege to have the opportunity to set music to William Shakespeare's words. He has been a constant inspiration to composers through the ages and I am no exception."

The year is 1613, Shakespeare is acknowledged as the greatest writer of the age. But disaster strikes when his renowned Globe Theatre burns to the ground, and devastated, Shakespeare returns to Stratford, where he must face a troubled past and a neglected family. Haunted by the death of his only son Hamnet, he struggles to mend the broken relationships with his wife and daughters. In so doing, he is ruthlessly forced to examine his own failings as husband and father. His very personal search for the truth uncovers secrets and lies within a family at war.