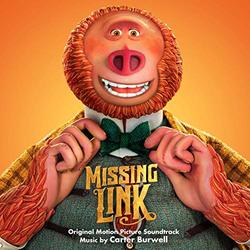 Lakeshore Records will release Missing Link—Original Motion Picture Soundtrack composed by Carter Burwell (Three Billboards Outside Ebbing, Missouri, Carol), worldwide digitally on April 12 with a CD and vinyl version forthcoming. The soundtrack also features an original song, "Do-Dilly-Do (A Friend Like You)," written and performed by The Walkmen's Walter Martin which will be available as an Instant Grat track on all album preorders beginning March 22. Annapurna Pictures will release the LAIKA film which was written and directed by Chris Butler and stars Hugh Jackman, Zoe Saldana and Zach Galifianakis, in theaters April 12.

This April, meet Mr. Link (Zach Galifianakis): 8 feet tall, 630 lbs, and covered in fur, but don't let his appearance fool you... he is funny, sweet, and adorably literal, making him the world's most lovable legend at the heart of Missing Link, the globe-trotting family adventure from LAIKA. Tired of living a solitary life in the Pacific Northwest, Mr. Link recruits fearless explorer Sir Lionel Frost (Hugh Jackman) to guide him on a journey to find his long-lost relatives in the fabled valley of Shangri-La. Along with adventurer Adelina Fortnight (Zoe Saldana), our fearless trio of explorers encounter more than their fair share of peril as they travel to the far reaches of the world to help their new friend. Through it all, the three learn that sometimes you can find a family in the places you least expect.

Says Burwell: "I remembered the soundtrack to the original 1956 Around the World in 80 Days, which was one of Chris Butler's inspirations. It had made an impression on me as a kid. I felt that the music for Missing Link should have that same kind of epic sweep right from the beginning when we meet Sir Lionel trying to photograph the Loch Ness monster in Scotland."

Burwell continues, "So the task was to do something lighter and more playful in tone than some of the more serious films that I've been involved in. In some ways a lighter tone is more difficult for me, as my experience has mostly been with dark comedy and intense drama. Seeing the film evolve from story boards to the animatic to the final animated film was novel and immensely helpful."

"One of the challenges was to counterpoint the size of the puppets with the grandeur of the locations and scope of the film. To me as a composer that was a great and satisfying challenge," says Burwell, who had also previously worked on the Oscar nominated stop motion animated feature Anomalisa.

Says Butler: "Walter wrote something both spirited and sophisticated that immediately got our feet tapping, and put a smile on every one of our faces. The song gave us exactly the right tone with which to end our fun-filled rollercoaster ride."