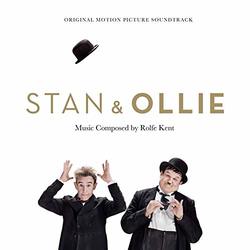 Entertainment One (eOne) announces the digital release of Stan & Ollie - Original Motion Picture Soundtrack, featuring an original score by Rolfe Kent, on March 29, 2019, the same week as the VOD, DVD and Blu Ray release of the film. The preorder for the soundtrack is available now at all major digital retailers.

Composer Rolfe Kent is best known for his scores for Sideways, for which he was nominated for a Golden Globe, Up in the Air, Election, Thank You for Smoking, Legally Blonde and the 2017 film Downsizing, among numerous others. He also composed the theme song to the Showtime Original Series Dexter, for which he was nominated for the Primetime Emmy Award for Outstanding Main Title Theme Music.

Stan & Ollie was directed by Jon S. Baird and stars John C. Reilly, Steve Coogan, Shirley Henderson, and Nina Arianda. Reilly was nominated for a Golden Globe for his portrayal of Hardy.

Kent says, "It's rare to be asked to compose something that really tells a story in music, and very rare these days to have a director bold enough to embrace melody and emotion in their score. This score was my best attempt to climb the mountain that Baird, Reilly and Coogan set before me. And it was a blast to do!"