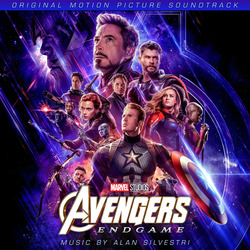 Marvel Music/Hollywood Records release the digital soundtrack to the Avengers: Endgame featuring score by Oscar-nominated and Grammy and Emmy award-winning composer Alan Silvestri. The physical album will be available on May 24.

Alan Silvestri has written music for over 100 feature films, including 17 scores with director Robert Zemeckis. Memorable scores from their 34-year collaboration includes the Back to the Future trilogy, Forrest Gump, The Polar Express and most recently 2018's Welcome to Marwen. Silvestri collaborated with Glen Ballard on the song "Believe" for The Polar Express, which earned a Golden Globe and an Academy Award nomination for Best Original Song. It won a Grammy Award in 2005. Silvestri's recent work includes Steven Spielberg's Ready Player One, Night at the Museum films, plus the scores to Marvel Studios' Avengers: Infinity War, Marvel's The Avengers, and Captain America: The First Avenger.

From the directors' liner notes, the Russo brothers said: "When something receives an extraordinary level of pop cultural attention, it's inevitably compared to The Beatles. The frenzy surrounding the Marvel Cinematic Universe, and especially this movie, which is the climax of an unprecedented twenty-two movie series, gets such a comparison. To take this a step further, there's a member of the creative ensemble behind these movies that can actually be compared to a Lennon or McCartney. Like them, this person is a song maker, who over an epic career, has created some of the most memorable film music of all time. Alan Silvestri's artistry has made Avengers: Endgame a much more soulful, entertaining and resonant experience, and his music has inspired the movie from its inception. And like a true Beatle, Alan recorded this magic at Abbey Road Studios in London for us all to enjoy."

Silvestri adds, "Rarely does an opportunity like Avengers: Endgame appear in the life of a film composer: a great story, great characters, great performances, a great MCUniverse, lovingly cared for by Kevin Feige, filled with the greatest fans of all time AND great filmmakers Anthony and Joe Russo, who are both fearless and willing to let the imagination take us wherever it will, supporting us every step of the way with that constant rallying cry 'WHATEVER IT TAKES!'"