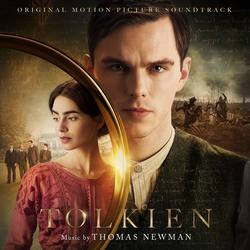 Of the soundtrack, composer Thomas Newman says: "Because J.R.R. Tolkien is embedded in popular culture, and because his work and outlook have been the subjects of much interpretation, I wanted to write music for Tolkien that would honor his ethos, his individualism, without being slavish to it. The musical vocabulary draws from a wide swath of instrumental and vocal colors, from winds with string accompaniment to solo voice in hushed pianissimo. There is Swedish kantélé, mandolin and monochord intersecting bell rhythms and piano-derived ambiences. The object is to give musical identity to the nascent feelings of the young storyteller from Birmingham, only just beginning to stretch his wings. And because much of the story is seen through the prism of his time spent in the trenches of World War I, there is that parallel experience of epic conflict that deepens my feeling for his language and, I hope, lets sound, noise, and melody rise up and sing."