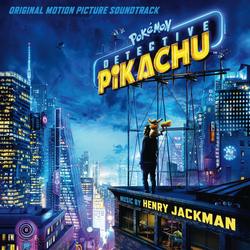 Of the soundtrack, composer Henry Jackman says: "Writing the music for Pokemon Detective Pikachu was immense fun. The movie itself was a unique invitation to create a new musical world representing all the wonderful and colorful characters of the Pokémon universe. I really enjoyed using many different sonic colors so, if you listen carefully, you can hear everything from the full symphony orchestra to analog vintage synths. I was also very happy to be working again with Rob Letterman, who even tried to get his beloved 808 Drum Machine into the score, until we found it was fatally damaged. To have been selected to write music for such a well-loved and precious franchise is a great honor, and I greatly hope my best efforts contribute positively to the Pokémon experience."