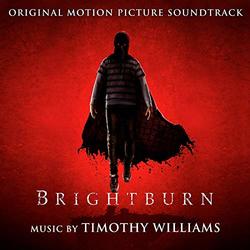 Sony Music announces the release of Brightburn (Original Motion Picture Soundtrack) with music by multi-award winning composer Timothy Williams (Wild Horses, Debug, Walking with the Enemy). Available Friday, May 10, the soundtrack features music from the James Gunn and Kenneth Huang-produced film, which makes its theatrical debut in the United States on Friday, May 24.

Of the soundtrack, composer Timothy Williams says, "Being able to merge two genres which have never been combined before, superhero and horror, was an amazing experience. I was thankful for a close collaborative relationship with the director Dave Yarovesky. We worked on the idea of a main theme at the beginning that would be simple and reflect the emotional investment of hope in the story. You hear this in a three note piano solo theme. As Brandon's power increases, we begin to feel the weight and power of a large orchestra which then bends and distorts with Brandon's descent into evil. The low strings and low brass mutate the theme and processed percussion pumps up the tension. Because Brandon is this kid from another world, I got to develop some unique sounds using a bespoke library for the ROLI which bends and pitches sound as well. Overall it was a dream come true to create this sound for a new genre film."