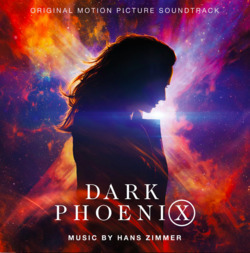 Fox Music releases the original motion picture soundtrack to Dark Phoenix, written and directed by Simon Kinberg. The film tells the iconic story of Jean Grey's transformation from gifted mutant into the most powerful force in the universe. The culmination of a superhero saga nearly two decades in the making, the spectacular new blockbuster is part science-fiction thriller, part character-driven drama, posing intriguing questions about identity and destiny. The soundtrack features an original score by Oscar-winning composer Hans Zimmer (Widows, Blade Runner 2049, Dunkirk) and is available now.

Adding to the undeniable impact of the film is Hans Zimmer's remarkable score. The composer's work lent immeasurably to Dark Phoenix, underlining the deep sense of unease at the heart of the story and helping to send audiences out of the theater entertained and deeply affected by Jean Grey's singular journey. "I love the way that he creates music that sometimes is almost not music, it's just sound," Kinberg says of Zimmer. "It's not sweeping and comfortable. It gets under your skin. It's really emotional when it wants to be emotional, but without being sentimental. That was exactly what we needed for this film."