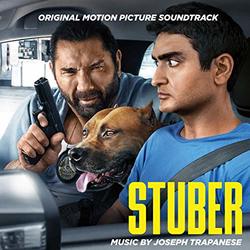 Trapanese is best known for his sleek score work for blockbuster films like TRON: Legacy, Straight Outta Compton, Oblivion and the Raid series. As a composer, arranger, and producer for movie, television, theater and video game music, he has collaborated with a number of mainstream musical acts including Daft Punk, Mike Shinoda, M83, Dr. Dre and Zedd.

Trapanese said, "Working with director Michael Dowse on Stuber was a dream come true. I grew up watching action comedies and buddy cop films, so writing the score for Stuber was a blast from beginning to end. The cast is incredibly funny and insanely talented, the comedy is hilarious, and the action scenes are truly thrilling and impressive. I'm very proud of the entire film and excited to share it with you."