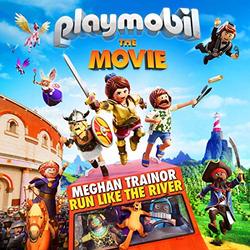 Sony Music today releases Meghan Trainor's "Run Like the River," a new track written by the pop songstress for the forthcoming Playmobil: The Movie (Original Motion Picture Soundtrack). Available everywhere now, "Run Like The River" is the lead offering from the soundtrack, which features score music by Grammy Award-winning composer Heitor Pereira (Despicable Me, The Angry Birds Movie, Smallfoot) and will be available everywhere Friday, August 2. In addition to the track, Meghan joins the cast of the live-action/animated adventure comedy, lending her voice alongside Daniel Radcliffe, Anya Taylor-Joy, Jim Gaffigan, Gabriel Bateman, Kenan Thompson and Adam Lambert. Directed by Lino DiSalvo and based on the best-selling children's play sets, Playmobil: The Movie will make its theatrical debut this year.

Regarding her inspirational song for the movie, Meghan Trainor says she wanted the track to have a universal message for audiences around the world. As she recalls, "I played it for the director when I first met him, and I said, 'You should have songs like this in your movie.' Then the next day they called and were like, 'We want that song!' It was just a magical moment."