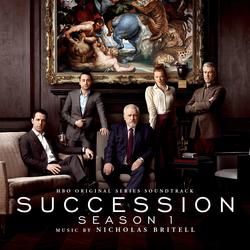 Milan Records, an imprint of Sony Music Masterworks, announces Succession: Season 1 (Original Series Soundtrack) with music by Academy Award-nominated composer Nicholas Britell (If Beale Street Could Talk, Moonlight, The Big Short and Vice). Along with his impressive resume of film and television scores, Nicholas Britell was most recently nominated for a 2019 Emmy Award for his work on Succession in the category of "Outstanding Original Main Title Theme." Available Friday, August 9, the soundtrack features music from the critically acclaimed HBO series, which was nominated for a total of five Emmy Awards including Outstanding Drama Series. The show returns for its highly anticipated second season on Sunday, August 11.

Of the soundtrack, composer Nicholas Britell says, "I am so excited to be releasing this music from Season 1 of Succession.The score features a juxtaposition of strings, winds, brass, pianos, odd electronic textures, 808 bass, and hip-hop beats. From the earliest stages of working on the show, I hoped for the music to have a sense of old-world gravitas, while also feeling strange and - at times - absurd. I've loved collaborating with Jesse Armstrong and Adam McKay to craft this musical landscape for Succession."

Created by Oscar and WGA nominee Jesse Armstrong (In the Loop), with the pilot written by Armstrong and directed by Oscar-winner Adam McKay (The Big Short), Succession tracks the lives of the Roy family as they contemplate their future once their aging father begins to step back from the media and entertainment conglomerate they control.