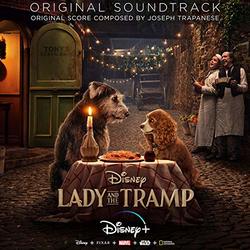 Walt Disney Records releases the digital soundtrack to Lady and the Tramp, the Disney+ original new movie available today. The album features new versions of classics such as "Bella Notte" and "He's a Tramp," the latter performed by multi-talented actress, singer and songwriter Janelle Monáe. The score was composed and executive produced by composer Joseph Trapanese.

Filmmakers brought on composer Trapanese to create an original score that felt both nostalgic and contemporary at the same time. The music goes deeper into the time period and the beginning of jazz. Trapanese said, "It is a true honor to be entrusted with the musical legacy of Disney's Lady and the Tramp. Charlie Bean and I worked diligently to celebrate the original film by maintaining the spirit of the classic songs, while being unafraid to explore the benefits of modern production and scoring to create an updated musical identity for today. The early 20th century American setting inspired us to incorporate Traditional New Orleans music and Americana into the fabric of the film. Alongside the artistry of Janelle Monae, trumpet soloist Nicholas Payton, and our 125-piece Hollywood orchestra, band, and choir, we aimed to create a signature sound for this generation's Lady and the Tramp that we hope will excite audiences for generations to come."

Janelle Monáe performs one of the animated film's most iconic songs (written and originally performed by Peggy Lee), "He's a Tramp." Another classic song from the film, "Bella Notte," is performed this time around by F. Murray Abraham and Arturo Castro, as Tony and Joe, respectively.

Kiersey Clemons sings the lullaby "La La Lu," as well as another track entitled "Peace on Earth." "Jim Dear and Darling compose music together, and the idea is that they wrote the lullaby for their baby," says Clemons. "There's always music going on in their home; you hear them singing as a family and it's really sweet."