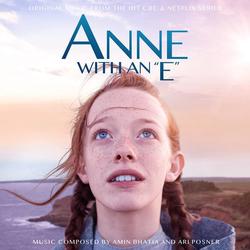 Original Music from the CBC and Netflix series Anne with an "E" will be released digitally on December 27th, 2019 exclusively from Varčse Sarabande Records. A CD version of the soundtrack to Northwood Entertainment's series will release on January 24th, 2020, and is now available for pre-order on VareseSarabande.com and other retailers. The soundtrack includes the theme song "Ahead by a Century" by The Tragically Hip and score from the composing duo of Amin Bhatia and Ari Posner. Season 3 of the program returns in January 2020.

"Doing a soundtrack felt natural because much like an orchestra, the series Anne with an "E" contains a great many components that are all moving in the same direction to tell beautiful and inspiring stories contained within. There were certain instruments and styles of music that we decided on quite early in the process. The Celtic flavor was a natural choice from the very beginning, and this informed the instrumentation that usually includes fiddle, tin whistle, accordion and mandolin. However, we were encouraged to experiment and expand those parameters wherever it felt right for the story, so that brought in other woodwinds and strings, ambient and percussive textures, solo cello and of course piano". – Amin Bhatia & Ari Posner, composers.

The series, a reimagining of the classic book Anne of Green Gables, is a coming-of-age story about a young orphan who is seeking love, acceptance and her place in the world. Amybeth McNulty stars as Anne, who has endured an abusive childhood in orphanages and the homes of strangers. Set in the late 1890s, Anne is mistakenly sent to live with aging siblings, Marilla and Matthew Cuthbert (played by Geraldine James and R.H. Thomson), who reside on Prince Edward Island. Anne, who proves to be uniquely spirited, imaginative and smart, transforms the lives of Marilla, Matthew and everyone else in their small town. While Anne with an "E" honors the foundation of L. M. Montgomery's novel, the series explores contemporary issues of identity, racism, feminism, friendship, bullying, gender parity, and empowerment through the lens of its fierce, starry-eyed, irrepressible protagonist.

"A period piece though it may be, the stories in Anne with an "E" are universal and timeless. Every detail, including the costumes and sets, the writing, the acting and even the live instruments in our score are incredibly accurate to the time. Yet a contemporary light shines on the issues that these characters would have faced back then, issues that are old as time and still as true and meaningful today. In that sense, much like the Tragically Hip's main title song "Ahead by a Century", we have always felt that the whole concept behind the show was exactly that". – Amin Bhatia & Ari Posner, composers.

"I'm thrilled to be partnering with Varčse Sarabande on a soundtrack release for Anne with an "E". Varčse is a label known for impeccable taste and savvy distribution – and we couldn't be in better hands. The Anne with an "E" fans have been asking for this since the show launched so we're grateful to finally be able to give them access to this gorgeous music by the brilliant Ari & Amin prior to the launch of our moving final season on Netflix. I'm also grateful to The Tragically Hip for lending their important and seminal song, "Ahead By A Century" to our credit sequence and to this stunning soundtrack". – Miranda de Pencier, Executive Producer, Anne with an "E" and President, Northwood Entertainment.