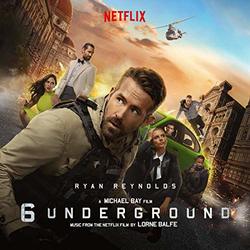 Of the soundtrack, composer Lorne Balfe says, "Michael Bay is one of the reasons I wanted to get into the film industry. Bad Boys, The Rock, Armageddon, to name from a few, are films that I would watch constantly. Michael wanted a score that musically represented the adrenaline, fast pace, and crazy world of the 6 Underground. This is our fifth collaboration so far. No one else shoots like Michael Bay and it is an honor to score every scene."